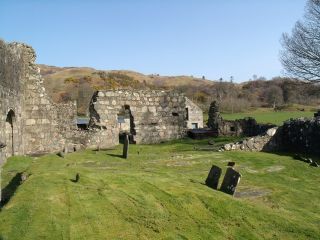 Ardchattan Priory is Scotland's second oldest inhabited religious house, founded in 1230. Parts of the church and domestic buildings remain. The Priory is located in Ardchattan Garden, on the north shore of Loch Etive.
History
The priory was founded around 1230 by Duncan MacDougall, Lord of Lorn. MacDougall is best known for building Dunstaffnage Castle, at the mouth of Loch Etive. Here on the shore of the loch he offered land to the obscure Valliscaulian order of monks from France. The Valliscaulians did not place emphasis on manual work as other monastic orders did; rather, they relied on endowments from benefactors to live a life of strict religious observance.

Why did MacDougall choose to endow a monastery to the Valliscaulians? Possibly he wanted to curry favour with Alexander II, who himself founded a monastery for the order at Pluscarden. Royal support was important at a time when both Scotland and Norway claimed Argyll and the Inner Hebrides.

Ardchattan House (c) Andrew Longton
Not only did the MacDougalls found the abbey, they dominated its religious life. Over the following centuries the position of Prior of Ardchattan became almost a hereditary post for members of the MacDougall family. The priory was rebuilt in the late 15th century, with a new refectory and enlarged monk's choir.

The last MacDougall prior was Eugenius, who was deposed in 1506. His replacement, Duncan MacArthur, tried in vain to revive interest in the priory, but the numbers of monks slowly dwindled. By 1538 only 6 monks remained, and that number had fallen to just 3 when the Protestant Reformation brought monastic life to an end in 1560. After the Priory was dissolved Ardchattan was seized by John Campbell, who would become Bishop of the Isles. Ardchattan has remained a Campbell possession ever since.

in 1602 Archibald Campbell, John's son, rebuilt the earlier monastic buildings to create a comfortable private residence, with the refectory becoming the family dining room. The monastic church remained as a parish kirk until 1732.

Today the remains of the priory stand beside the 17th century house, roofless to the sky. Among the ruins are several examples of carved stone memorials, including The MacDougall Cross, carved by a mason from Iona and commissioned by Prior Eugenius MacDougall. This is one of the very few examples of carved memorials in the West Highlands to bear the sculptor's name, in this case John O Brolchan.

On the hillside above the Priory stands the ruined 15th century church of St Baodan, with a holy well just outside an overgrown burial ground. 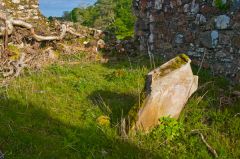 Nearby accommodation is calculated 'as the crow flies' from Ardchattan Priory. 'Nearest' may involve a long drive up and down glens or, if you are near the coast, may include a ferry ride! Please check the property map to make sure the location is right for you.

More self catering near Ardchattan Priory >>