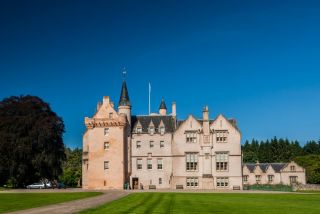 Originally a Z plan castle of 16th and 17th centuries, rebuilt after being burned. Brodie Castle contains collections of fine French furniture, 18th-century lacquer furniture, and a wealth of porcelain, timepieces and paintings, including Dutch Old Masters. The most interesting feature, however, is a superb plasterwork ceiling, especially in the dining room.

We do not know how long there have been Brodies here; the clan records perished when Lord Gordon burned the castle in 1645 during the Earl of Montrose's campaign. We do know that Robert the Bruce granted Brodies the estate in 1311, but the family itself must go back much further in the mists of time. The name may come from the ancient Pictish royal house of Brude. We do know that the family was important by 1160 when Malcolm Canmore confirmed their privileges as Thanes.

Equally little is known of the first medieval house here. The fortified house we see today dates from around 1560, with considerable rebuilding in the following centuries to turn the Z-plan tower into a comfortable residence.

A Spelling Error
In the dining room is a Chinese dinner service decorated with the Clan Brodie coat of arms and its motto 'Unite'. Unfortunately, on two of the pieces, the painter has made a spelling error and instead of 'unite' has spelt out the word 'Untie'. Not quite the same meaning!

Near the castle is a mound, or low hill, known as Macbeth's Hillock. Traditionally this is said to be the place where Macbeth met the three witches who foretold his rise to become king. We know that Shakespeare embellished Scottish history liberally to create the plot of his play, so take the story with a grain of salt, but there was a real Macbeth, so there could be some basis in fact for the traditions.

Beside the entrance drive leading to Brodie Castle is a carved Pictish stone known as Rodney's Stone. This stands 6 feet high and is beautifully carved with traditional Pictish symbols. 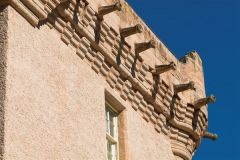 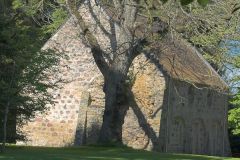 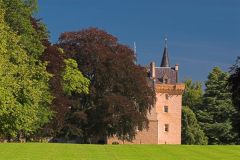 More self catering near Brodie Castle >>