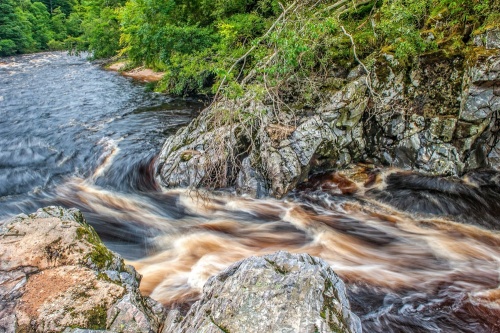 This scenic beauty spot on the River Findhorn takes its name from a famous incident in local clan warfare. Unfortunately, the name is completely wrong! To find out why, we have to go back in time, to the 14th century, when the land on the west side of the river was owned by Thomas Randolph, the Earl of Moray.

The land on the east shore of the river was in the hands of Sir Alexander Cummings and his six sons. The Cummings family traditionally held the post of ranger of the Forest of Darnaway. This was a very lucrative position and brought with it wealth as well as social standing.

However, the Cummings and Randolphs clashed, with disastrous consequences. For Randolph was the nephew of King Robert the Bruce, and the king sided with his relatives.

Earl Randolph told Cummings to stay away from Darnaway. Alexander, the eldest Cummings son, took great offence. He gathered together a force of men, perhaps as many as 100 strong, and advanced on Darnaway.

The Cummings men were ambushed, and forced to retreat. Alexander Cummings and three of his men found themselves backed up against the river. Fearing for their lives, the four men leapt across the chasm to the safety of the eastern shore.

So it was not, then, Randolph who leapt, but Cummings, so common sense would indicate that the location should be called Cumming's Leap. But logic and history have never been strong companions; Randolph's Leap it is and always will be!

I said earlier that Cummings had leapt to safety, and if you read the information signs erected by the site you would think that the story ended there. Sadly for Cummings, it did not. Pursued by Randolph's men, Cummings and his companions hid in a cave. They were found by their enemies and brutally killed.

Not, perhaps, the romantic ending that the glorious scenery of this idyllic location deserves!

To reach Randolph's Leap you have two choices. The simplest is to park at a layby on the B9007, just south of the Bridge of Logie. From here a very short path leads down to the Leap. An alternative is to park at Logie Steading visitor centre, off the B9007.

From the Steading, take the signed path, which leads along the river, crosses the bridge, and then follows the trail to the Leap. The entire round trip from Logie Steading is about two miles. Do wear good waterproof footwear, as the trail can be very muddy in wet weather.

There are no facilities at Randolph's Leap; what you will see is a lovely riverside setting, with trees reaching to the water's edge on both sides. A ragged finger of rock reaches out from both banks, like a bridge broken in the middle.

At a guess, the gap is about 10 feet across, and between the rocks the river rushes swiftly past. A man would have to be mighty determined to try to leap the chasm; I certainly wouldn't want to try it. Of course, Cummings was in fear for his life, pursued by enemies bent on ending his stay on this earth, so no doubt fear lent him wings, as the saying goes! 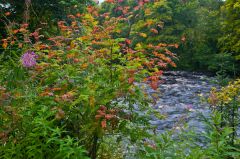 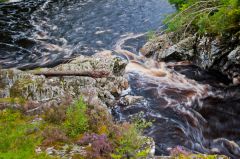 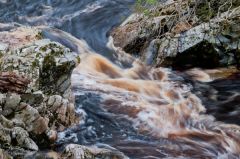 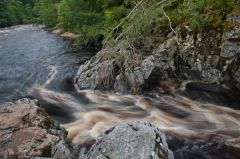 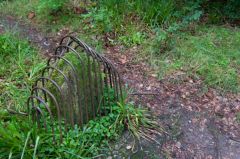 More self catering near Randolph's Leap >>