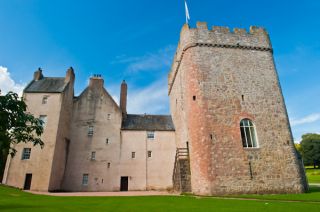 The Tower of Drum was built as a hunting lodge by Alexander III around 1280. The king called on Richard Cementarius, Provost of Aberdeen, to oversee the building of his lodge. Cementarius created a sturdy tower over 70 feet high, with walls fully 12 feet thick. Within a secret chamber in the thickness of the wall was the castle well.
That well was the scene of the darkest moment in the history of Drum Castle. In the early 16th century, the 5th laird of Drum killed and dismembered his chaplain in the well. He claimed that his deed was the result of catching the chaplain in bed with his wife, and he was let off with a fine of 100 marks.

When Robert the Bruce defeated his great rivals for the throne, the Comyns, he gave Drum to his close friend and armour-bearer, William de Irwyn. Drum then passed in an unbroken line through 24 generations of Irvines.

It fell to an army of Covenanters during the religious struggles of the 17th century and was ransacked twice by the Marquis of Montrose. The Irvines supported the Stuarts in the Jacobite Risings of 1715 and 1745. Following the Battle of Culloden in 1745 the 17th laird hid from government troops in a secret chamber within the castle. His family, fearing the worst, buried the family silver. Unfortunately, the government soldiers spotted the freshly dug earth and siezed the money. The Irvines kept the castle and estate, but their days of glory on the national stage were over.

One of the special features at Drum Castle is the garden of historical roses. This delightful walled garden is divided into four different sections, each planted in the style of a different century, with authentic rose varieties where possible. And I can say from experience that the scent from the different flowers is divine!

The oldest part of the castle is the High Hall, one of earliest tower houses in Scotland, dating to the late 13th or early 14th century. Part of the tower was later absorbed into the Jacobean expansion to the house. You can climb to the roof of the tower for wonderful views over the castle grounds.

The interiors are simply furnished, with exhibitions telling the story of the people who lived here over the centuries, particularly the last owners of the house. 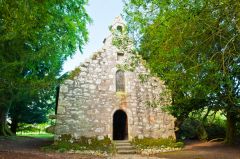 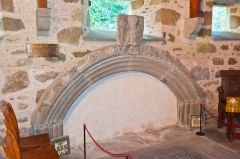 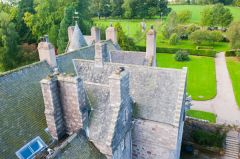 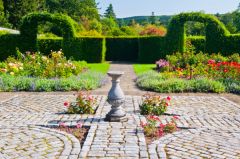 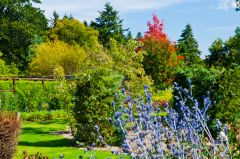 More self catering near Drum Castle >>