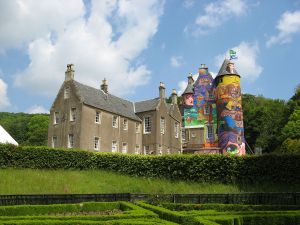 Kelburn Castle
A historic castle with a modern twist, Kelburn Castle is the home of the Earls of Glasgow and has been continuously occupied since 1140 by the same family. Most popularly known today for the colourful cartoon murals on the castle exterior.

The story of Kelburn is the story of the Boyle family. The family originated in Caen, Normandy, and came to Britain with William the Conqueror in 1066. At that time their name was De Boyville, but the name became Anglicised over time into Boyle. In 1140 a branch of the family settled near Largs, and the rest, as they say, is history.

We do not precisely when the first stone building was erected at Kelburn, but there was a stone keep on the site by 1200. The Norman keep was later engulfed within a much larger tower house built n 1581 by David Boyle. The 16th-century castle is marked by a pair of tall, turreted towers at opposite corners of a central block.

In 1700 the castle was enlarged again, with a William and Mary style mansion block, and then in 1879, a new wing was built by MP Alexander Crum, who rented Kelburn from the 6th Earl of Glasgow.

In 1977 the historic castle estate was opened to the public as a multi-purpose family attraction, with gardens and grounds, family attractions, workshops, and special events taking place regularly. The 18th century Home Farm has become a visitor centre, cafe, and exhibition area. In the grounds is a late Victorian museum displaying objects brought back from New Zealand by the 7th Earl of Glasgow after his tenure as Governor.

The grounds include the steep gorge of the Kel Burn, which falls 800 feet through a series of waterfalls to the sea. Trails lead along the glen, through a woodland lush with wildflowers, shrubs, trees, and ferns. At the bottom of the glen, a 20-foot waterfall drops into a grotto overhung by limestone cliffs. Near the house is the Plaisance, a formal walled garden established in the 18th century.

Then there is the Children's Garden, laid out in 1769 as a gift from the 3rd Earl to his children, with box hedges forming a Scottish flag. A monument to the 3rd Earl, designed by Robert Adam, stands in the Earl's favourite part of the glen, and close to the castle is a sundial erected in 1707 by the 1st Earl.

In recent years the castle has also been opened for tours during the summer months. Pre-booking is advised due to the tour's popularity.

Most people know Kelburn for its innovative street art project, or perhaps it is better described as a castle art project, which brought together 4 leading graffiti artists from Brazil. The artists were asked to transform the rendered exterior of the castle's south walls and tower into a gigantic work of art, blending Scottish architecture with vibrant and colourful urban art on a giant scale. The Kelburn Castle 'canvas' has been named one of the top 10 examples of street art in the world.

Nearby accommodation is calculated 'as the crow flies' from Kelburn Castle. 'Nearest' may involve a long drive up and down glens or, if you are near the coast, may include a ferry ride! Please check the property map to make sure the location is right for you.

More self catering near Kelburn Castle >> 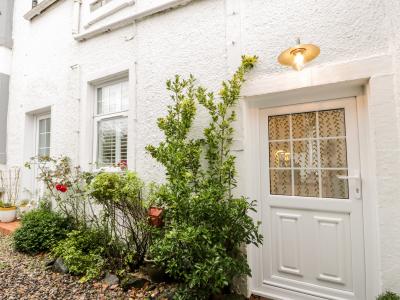 This quaint, semi-detached house rests in Fairlie, Scotland and can sleep two people in one bedroom.
Sleeps 2