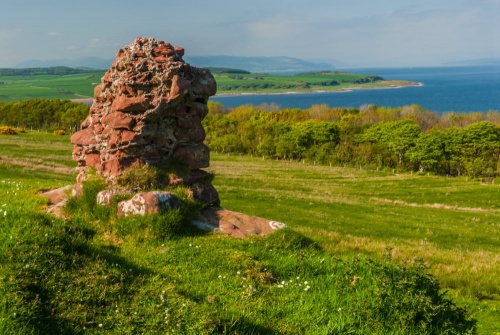 Standing on an exposed hilltop in a glorious location overlooking Kilchattan Bay stand the paltry remains of a medieval fortified house known as Kelspoke Castle.

The date of Kelspoke Castle's construction is uncertain, as is the 'castle' part of the name; it was not known as a castle until the 19th century. The official Ordnance Survey Name Book of 1863 suggested that it may have been no more than a watchtower.

Very little is known of Kelspoke's history, but we do know that it was in the hands of the Stewart family, as there is a record that Lady Agnes Stewart was born at Kelspoke sometime before 1579 to Andrew Stewart, Master of Ochiltree, and his wife Margaret Stewart of Methven. 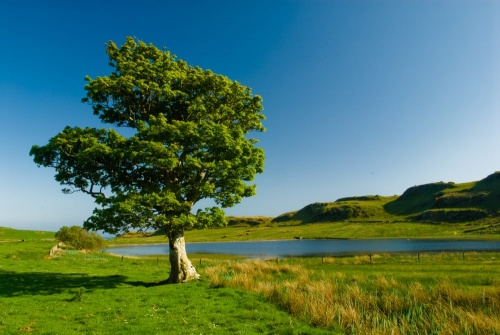 Very little remains of the castle beyond a short section of wall and foundation footings. It appears from the remains that the original building was laid out as a traditional L-plan tower house. Most of the stone was removed to build nearby farm buildings and cottages, most of which are now in ruins.

The standing remains are approximately six feet high (1.8m) and consist of red sandstone blocks bonded with mortar. The adjoining footings are covered with turf.

Historians estimate that the main wing was 16m long and 5m wide, with a 6m square tower. The east wall used the underlying sandstone bedrock as a foundation. 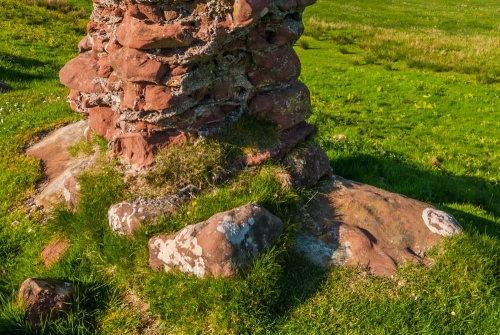 Please don't visit Kelspoke Castle expecting an impressive ruin; what makes a walk up from Kilchattan village worthwhile is the location, with outstanding views over the bay below and out to the islands of Great Cumbrae and Little Cumbrae.

The ruins are the most visible remains of Kelspoke township, which exists mainly as raised foundations covered by turf. Part of the remains is a large, square yard, where a sycamore tree now grows.

The castle and township lie below a small reservoir, known as Upper Reservoir, while further down the slope towards the village is Lower Reservoir.

Getting to the castle ruin is easy. Just take the obvious signposted path in the centre of the village that leads up the hill before curving left along the slope to reach a terrace. You will the Upper Reservoir ahead on your right and the castle remains at the edge of the terrace on your left.

Nearby accommodation is calculated 'as the crow flies' from Kelspoke Castle. 'Nearest' may involve a long drive up and down glens or, if you are near the coast, may include a ferry ride! Please check the property map to make sure the location is right for you.

More self catering near Kelspoke Castle