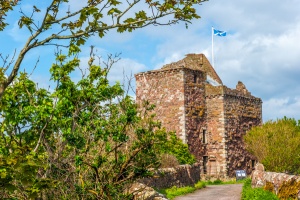 Set on a rocky headland looking over the Firth of Clyde, Portencros Castle is a 14th-century fortified tower built by the Boyd family. The Boyds may have built the castle, but they were by no means the earliest people to use the headland. Excavations have revealed an Iron Age settlement a stone's throw from the castle site on Auldhame (Auldhill).

Tradition says that the ancient kings of Scotland were brought to Portencross before being taken by ship to the holy island of Iona for burial. According to the stories the king's bodies lay in state at Portencross Castle before making the final voyage. The 'castle' in question was not the one we see today, for that was not built until the 14th century!

After the Norman Conquest, the area around Portencross was controlled by the de Ross family, and it was probably the Rosses who reused materials from the Iron Age dun to build a motte and bailey fortification in the early 12th century.

Robert I gave the Boyds estates around Portencross in thanks for their support at the Battle of Bannockburn in 1314. Robert's son, Robert II, maintained close ties with the Boyds, and actually signed several royal charters at Portencross.

Robert III also issued royal charters from Portencross, but during the 15th century the castle was used less and less by the crown and reverted to acting as a power base for the Boyd family. 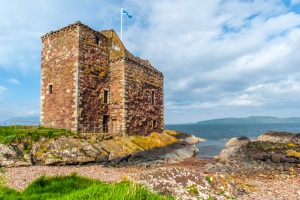 The castle and beach

The first part of the Boyd's 14th-century castle was a simple hall-house, the lower part of the building we see today. This may have been protected by a low wall, or barmkin. Some years later - historians are not sure of the exact date - the hall-house was converted to a tower house, with east and west wings. The first written record of Portencrosss Castle comes from 1572.

The castle stands on a rocky spur of land beside a narrow inlet, with a very small beach. The location would have been impossible for large ocean-going ships, but perfect for the small, light birlinns, the workhorse vessel of the west coast seas during the medieval period. But the birlinn was not the only vessel associated with Portencross; the waters around the castle may hide the wreck of a Spanish galleon fleeing the wreck of the Armada in 1588.

Why would a galleon have sought shelter at Portencross? Alexander Boyd of Portencross was a supporter of Mary, Queen of Scots, and was sympathetic to Spanish efforts to oust Mary's cousin Elizabeth from the English throne.

In 1740 divers found the wreck and retrieved 20 cannons from the seabed. More modern attempts to find the wreck using resonating devices did find some unusual anomalies on the sea bed, but as yet the galleon - if it exists - remains lost.

Portencross remained a seat of the Boyd family until the middle of the 17th century, when they moved to a more comfortable mansion in the village. The castle was used by local fishermen in the early 18th century, but eventually even the fishermen left the castle to moulder into ruin.

In 1900 William Adams purchased the estate and reroofed the east wing. Finally, in the late 20th century a local charity group was formed to maintain and restore the castle. Volunteer guides now give regular castle tours during the summer months.

What a fantastic location! The castle stands alone on its small headland, not far from a cluster of small cottages. The site is well signposted, with a good information panel that gives some background on the site.

Unfortunately, we were not able to visit on a day when guides were available, so we had to content ourselves with poking around the outside the building and exploring the shore. It truly is an impressive site, and the castle looks to have been beautifully restored. 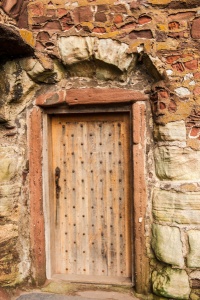 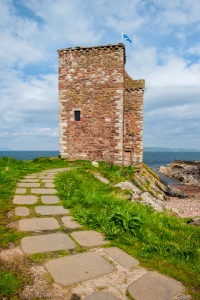 The path to the castle
headland 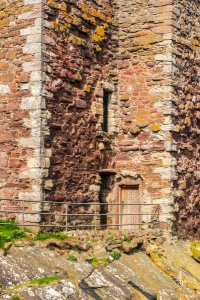 The meeting of the
castle wings 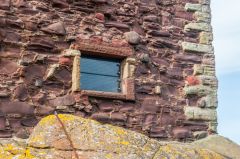 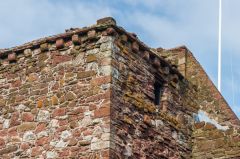 Nearby accommodation is calculated 'as the crow flies' from Portencross Castle. 'Nearest' may involve a long drive up and down glens or, if you are near the coast, may include a ferry ride! Please check the property map to make sure the location is right for you.

More self catering near Portencross Castle