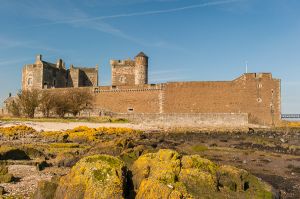 One of Scotland's most important military strongholds, Blackness Castle was built in 1440's, strengthened in the 16th century as an artillery fortress, and finally used as a Royal castle and an ammunition depot in the 1870's. The castle stands on a rocky promontory on the southern shore of the Firth of Forth.

Blackness was built by Sir George Crichton, on the site of an even early medieval fortress. Crichton intended the castle as a private residence, but it was seized in 1453 by James II and for the most of its life it served as a royal military stronghold. Over more than 400 years service in crown hands it has been a garrison, prison, munitions store, and military fort.

In 1536, during a time of increased tension between Scotland and England, Blackness was enlarged and strengthened. The landward walls were raised and built to an astonishing 5.5 metres thick (roughly 18 feet). The central keep was converted into a prison.

Blackness had strong links to Mary, Quen of Scots. When Mary was born in 1542 it was planned for her to be kept at Blackness for security. She never did come, but some 25 years later after civil war broke out between Mary and the leading Protestant lords, Blackness garrison remained loyal to the queen and caused major problems for shipping up the River Forth.

Oliver Cromwell's men besieged Blackness in 1650, and the defences were severely damaged by artillery fire. It was rebuilt, but as time went on it became less important as a stronghold.  At the heart of the castle is the tower, in the centre of the courtyard. In 1667 the tower was adapted to serve as a prison for Covenanters, and a turnpike was inserted in the north east corner. A large gun platform was then erected over a pair of vaulted chambers, and under the tower chamber is a pit prison.

At one time Blackness acted as the port for nearby Linlithgow, and the castle served as one of four fortresses set up by the Act of Union in 1707 to protect southern Scotland against possible attack by Highlanders. From 1759 it was used as a transit camp for French prisoners of war, and over 45,000 prisoners are known to have been held here over the following 56 years.

In 1918 Blackness was finally abandoned by the military, and converted into its current role as a heritage tourist attraction under the care of Historic Scotland.

The castle's shape has led to its popular nickname, 'The Ship that Never Sailed'. 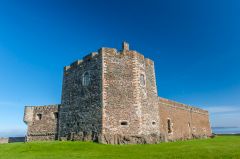 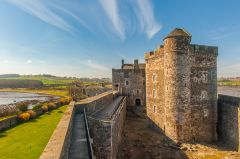 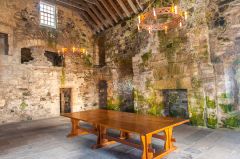 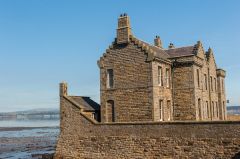 More self catering near Blackness Castle >>