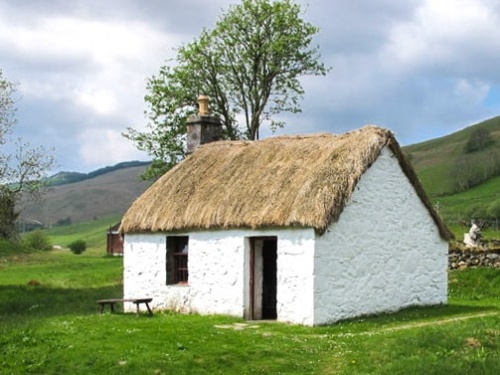 An open-air folklife museum of the West Highlands, the history of Auchindrain Township dates back over 1000 years. There is a display centre with historic houses, barns and byres. Auchindrain is perhaps the best-preserved example of a Highland farm township, inhabited since at least 1533 and covering 21 acres.

Auchindrain township was inhabited by tenants of the Duke of Argyll. Over the centuries people moved away, prompted by the Highland Clearances and agricultural improvements which made old-fashioned farming communities less tenable. 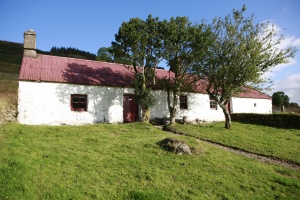 The last inhabitant of Auchindrain finally left in 1963, but rather than allow the settlement to become derelict, it was preserved as an example of a way of life that was once common in this area of Argyll and the West Highlands.

Visitors can learn about the families who lived here, and the lifestyle that was so typical of Scottish rural life until the 19th century.

The entire settlement has been created a Conservation Area and listed Category A in recognition of its historic importance.

The name Auchindrain comes from the Gaelic 'Achadh an Droighinn', meaning a field where blackthorn trees grow. It was a joint-tenancy township, a type of settlement that was common in Scotland up to the 19th century.

Traditional Scottish townships were based around low-quality hillside and mountain grazing land known as 'outruns'. Near the houses was an infield, where crops like barley, oats, beans and peas were grown. The infield was divided into thin strips called rigs. One-third of the rigs were rotated between the tenants annually through the drawing of lots, which in theory allowed everyone an equal opportunity to farm productive land.

In addition to the tenants, townships were home to cottars, who practised crafts like weaving, fishing, and masonry. 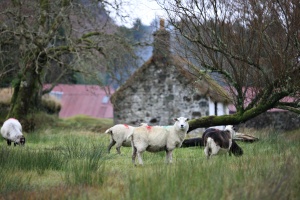 Sheep wander through the township

This traditional township way of life changed in the 18th century when demand for wool prompted landowners to enclose the township lands and turn them over to grazing land for large flocks of sheep.

Tenants who had farmed the land for a thousand years were moved - sometimes by force - to new crofting townships where they had to pay rent for a plot of land and often had to work outside the settlement to make ends meet.

Sometimes the old townships were transformed into sporting estates, but in most cases, especially in Argyll, they were absorbed into huge farms rented out to a single tenant.

By the 1860s only a few joint-tenancy townships were left. Queen Victoria visited the area as a guest of the Duke of Argyll in 1875 and the Duke showed her Auchindrain and the nearby village of Achnagoul.

The queen dubbed them 'primitive villages', and the Duke acknowledged that as far as he knew they were the last two joint-tenancy townships in Scotland. Achnagoul was abandoned shortly after, leaving Auchindrain as perhaps the last such township in Scotland, a remnant of a lost way of life.

There are two parts to Auchindrain; the East Township and the west Township, each enclosed by a drystone wall. These walls, or dykes, helped keep cattle away from the buildings.

There are four different types of buildings on display. The most common is a longhouse, occupied by joint-tenancy families. One end of the longhouse was used by people, the other end by animals. There are six longhouses, the oldest dating to around 1790.

The human end of the building is subdivided into three areas; the Kitchen, the Room (used for guests and extra sleeping quarters), and the Closet, between the Kitchen and the Room, used for making butter and cheese or as an extra sleeping space. Each of the 6 longhouses also has a barn.

Each dwelling (the houses and longhouses) was surrounded by an enclosed area called a 'kailyard' for growing vegetables and herbs. You can also see 'stackyards', used for storing corn and hay for the winter months.

Auchindrain provides a fascinating glimpse into a traditional way of life that was once common throughout Scotland.

All images except the main photo are (c) The Auchindrain Trust. 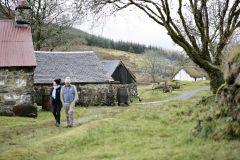 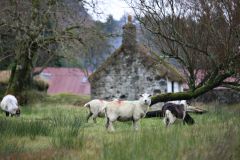 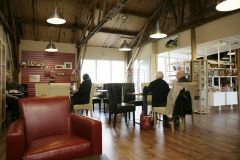 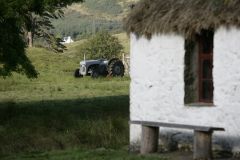 Nearby accommodation is calculated 'as the crow flies' from Auchindrain Open Air Museum. 'Nearest' may involve a long drive up and down glens or, if you are near the coast, may include a ferry ride! Please check the property map to make sure the location is right for you.