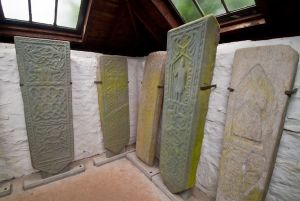 The 18th-century church at Kilmodan boasts some of the finest carved stones in Argyll. Many of these have been placed in a small building at the rear of the churchyard to protect them from the elements. The building probably belonged to the Campbells of Auchenbreck and was used as a burial enclosure.

Among the carved stones are several grave slabs, and fragments of crosses including one reputed to be the medieval cross that once stood at Garvie. There are three grave slabs crafted by the Loch Awe school of carvers, dating from the 14th and 15th centuries (further examples of work by the Loch Awe school can be found at Kilmartin, south of Oban).

There are several examples of symbols found frequently throughout Argyll, including small figures of men wearing armour, priests, stags, unicorns and other mythical beasts, caskets, and shears.

One of the grave slabs is perhaps the finest work produced by the Loch Awe school, and depicts a set of tongs, suggesting that it was carved to mark the grave of a blacksmith. Among the more recent pieces at Kilmodan is a grave slab to Donald McCloy, who served as minister at Kilmodan from 1609-1636.

The church here is dedicated to St Modan, who was an early Celtic saint, a contemporary of St Columba. Modan's original chapel was traditionally thought to have been sited on the hillside east of the present church. The current church dates to 1783 and is at least the third on this site.

On the exterior of the south wall is a stone carved with SDC, which commemorates Sir Dugald Campbell, 1st Baronet of Auchenbreck (d. 1643) - or perhaps the third baronet, also named Dugald, who died in 1661.

Perhaps the most famous native of Kilmodan was Colin MacLaurin (1698-1746), a famous mathematician at Edinburgh University. MacLaurin was born in the old manse, still visible behind the current building.

Nearby accommodation is calculated 'as the crow flies' from Kilmodan Sculptured Stones. 'Nearest' may involve a long drive up and down glens or, if you are near the coast, may include a ferry ride! Please check the property map to make sure the location is right for you.