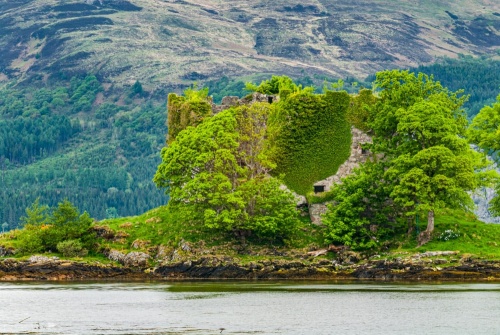 Old Castle Lachlan is a ruined 15th-century castle on the southeastern shore of Loch Fyne. The castle stands on a low promontory looking across Lachlan Bay. Further inland, on the northern bank of Strathlachlan River, stands the 'new' castle -- the Scottish baronial mansion of Castle Lachlan, the home of the chiefs of Clan Maclachlan. Across the river stands Kilmorie Chapel, the traditional burial place of the chiefs of Clan Maclachlan.

The first castle here at the mouth of the Strathlachlan River was probably erected in the late 13th century. Certainly, it existed by the early 14th century, for a charter of 1314 was issued at 'Castlelachlan'.

No trace remains of the 14th-century building. The ruined fortress we see today was begun in the early 15th century and completed later in that same century. A ruinous stone keep is the most obvious relic of the medieval castle. The castle is laid out as a rough rectangle measuring roughly 21.3m long and 16.5m wide. The keep walls rise to a height of 13.1m.

The castle keep stands within a curtain wall, with only one small doorway allowing passage through the wall. Inside the courtyard formed by the curtain wall is a well, with a tower house on either side.

The tower to left has a storeroom and kitchen at ground level, with private quarters for the chief and his family on the first floor and a large hall on the second floor. Old Castle Lachlan is unusual in that the chief had two rooms for his own use; the solar (the chief's private quarters) and the hall. 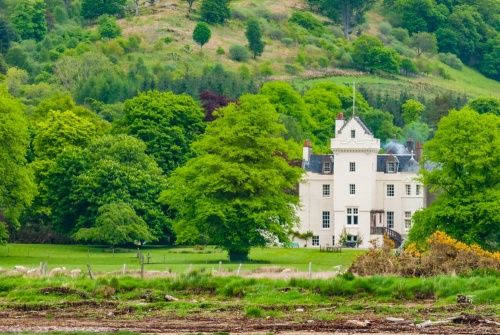 Clan Maclachlan (sometimes referred to as Clan Lachlan) traces its origins to Lachlan Mor, who lived in the Strathlachlan region in the 13th century. Lachlan Mor is himself said to be a descendant of an 11th-century Irish prince named Anrothan O'Neill, who, in turn, was descended from Niall Noigiallach, a 5th-century High King of Ireland. Other clans claiming descent from Anrothan O'Neill include Clan MacSween, Clan MacNeil, Clan Lamont, and Clan MacEwen.

During the 15th century, Cowal was claimed by both the Campbells and the Lamonts. The chiefs of Clan Maclachlan were related by marriage with both clans, so no matter who had the upper hand at any given time, they were guaranteed to come out on top.

Clan Maclachlan supported the Jacobite cause in Bonnie Prince Charlie's bid for the throne, and the 17th clan chieftain lost his life at the Battle of Culloden in 1746. A clan legend says that the chief's horse made its own way back from Culloden. The riderless horse swam across the loch to reach the castle and refused to leave it again until its death.

In retribution for the clan's Jacobite sympathies, a government warship sailed up Loch Fyne and bombarded Old Castle Lachlan, reducing it to a ruin. The medieval fortress was never repaired.

Clan Lachlan was saved from further retribution by their links to Clan Campbell. The Campbells gave shelter to the 18th chief, a young boy at the time of his father's death, and used their influence to get Clan Lachlan's estates restored in the aftermath of the Jacobite rebellion.

In 1790 Donald Maclachlan built a new residence further up the Strathlachlan River to replace the medieval castle. This new Castle Lachlan was built in the then-popular Queen Anne style, and stood in a picturesque landscape of formal gardens and parkland, with the ruined medieval castle acting as a Gothic folly, or eye-catcher.

Fashions change, and a century later the castle was rebuilt in the Scottish baronial style, with the addition of turret and battlements. Today, the clan chief lives in half of the castle, while the other half is rented out.

Clan Lachlan launched an international appeal in 2011 to raise necessary funds to restore Old Castle Lachlan. As part of the restoration programme, a new walking trail was built, linking the castle to Kilmorie Chapel across the river.

You can learn more about restoration efforts, or make a donation, at the official website (link below).

Old Castle Lachlan is on the B8000 about 4.5km from its junction with the A886. There is a parking area a stone's throw south-west of Kilmorie Chapel and a larger car park at the Inver Restaurant, a few hundred metres down the road. A signed footpath leads from both the chapel and the restaurant. These paths link to a path that leads across the river, skirting the edge of Lachlan Bay before joining a paved track to the castle.

About Old Castle Lachlan
Address: Garbhallt, Cowal, Argyll and Bute, Scotland
Attraction Type: Castle
Location: Access by a footpath from Kilmorie Chapel or Inver Restaurant, on the B8000 about 4.5km from its junction with the A886.
Website: Old Castle Lachlan
Location map
OS: NS005953
Photo Credit: David Ross and Britain Express

Nearby accommodation is calculated 'as the crow flies' from Old Castle Lachlan. 'Nearest' may involve a long drive up and down glens or, if you are near the coast, may include a ferry ride! Please check the property map to make sure the location is right for you.