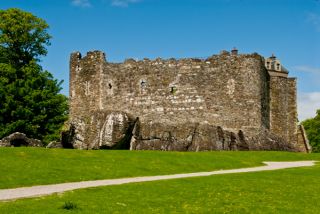 Dunstaffnage Castle
A 13th-century castle surrounded by a high great curtain wall, guarding the mouth of Loch Etive. Dunstaffnage has a good claim to be the oldest castle in Scotland. Quietly tucked away in a wooded copse near the castle is a small 13th-century chapel.
History
There has almost certainly been a fort here at the point where Loch Etive empties into the Firth of Lorn for over 1500 years. The early Scottish kingdom of Dalriada had a stronghold here, and even more importantly for Scottish heritage, the Stone of Destiny (The Stone of Scone) was probably kept here for several centuries after it was first brought from Ireland.

Around 1225 the powerful Lords of Lorn, the MacDougalls, built a stone castle on the broad rocky site. The probable builder was Duncan, son of Dubhgail, and grandson of Somerled, King of the Isles. The MacDougall fortress was on a quadrangular plan, with extremely high walls reaching 60 feet in places, surrounding an inner courtyard with service buildings and living quarters. 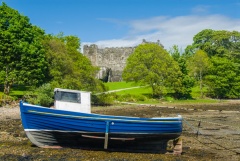 Dunstaffnage from the beach
There were very few openings in the wall, and narrow arrow slits leave no doubt that this was a fortress first and a residence second. Three round projecting towers were added by Dubghall's son, Ewen, who also added a great hall in the courtyard. So well did the 13th-century masons do their job that the castle has remained almost unaltered since it was built.

In the 13th century, the MacDougalls allied themselves with the Norse against Alexander II. The king brought an army to Lorn in 1249, but as he was poised to attack, the king fell ill and died in mysterious circumstances on the Island of Kerrera. Dunstaffnage was spared, but not for long.

The MacDougall lords of Dunstaffnage made a poor political choice, allying themselves with Edward I of England against Robert the Bruce in the Scottish Wars of Independence. When Edward died in 1307 they were left to the mercy of Scottish nationalist supporters. In 1308 they suffered a heavy defeat at the Pass of Brander, and King Robert besieged and captured Dunstaffnage the following year. 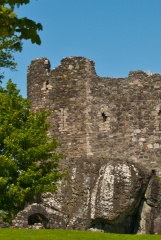 The castle wall and
rocky base
In 1463 a bitter and bloody feud between the MacDougalls and the new Stewart lords of Lorn saw John the 2nd Stewart lord, murdered by an assassin sent by the MacDougalls. For 6 years a bloody war waged between the clans, which ended in 1470 when Clan Campbell of Argyll finally took complete control of Dunstaffnage and Lorn.

The hereditary post of Captain of Dunstaffnage has been held on and off by a Campbell since 1322 and without a break since 1470. As a symbol of the clan's connection with Dunstaffnage the Captain spends one night a year in the Gatehouse, even though Dunstaffnage is now officially in the care of Historic Scotland.

One final historical note: Flora MacDonald was briefly held at Dunstaffnage following her capture in 1746 for aiding Bonnie Prince Charlie's escape to France following the Battle of Culloden. She only remained at the castle for a few days before being taken south to the Tower of London. There she was put on trial, but public sympathy meant that she was released in 1747.

Nearby accommodation is calculated 'as the crow flies' from Dunstaffnage Castle. 'Nearest' may involve a long drive up and down glens or, if you are near the coast, may include a ferry ride! Please check the property map to make sure the location is right for you.

More self catering near Dunstaffnage Castle >> 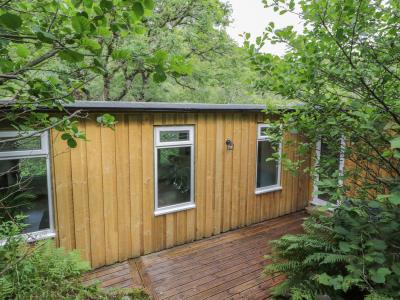 This stunning ground-floor lodge rests in Kilninver near Oban, Scotland and can sleep two people in one bedroom.
Sleeps 2 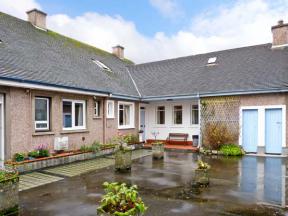 This first floor apartment is set in the town of Oban sleeping five people in three bedrooms.
Sleeps 5