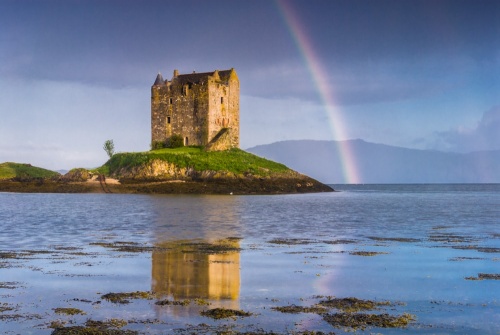 A rainbow over Castle Stalker

Motorists passing along the A828 between Creagan and Ballachulish, on the rocky coast of Argyll, cannot fail to notice the romantic outline of Castle Stalker, situated on a small islet in Loch Laich. The castle dates to the early 14th century and was begun by the MacDougalls, Lords of Lorn.

The lordship of Lorn later passed to the Stewart family, and it was Sir John Stewart who built the current Castle Stalker sometime around 1446. The name 'Stalker' loosely translates from the Gaelic as Hunter, or Falconer. 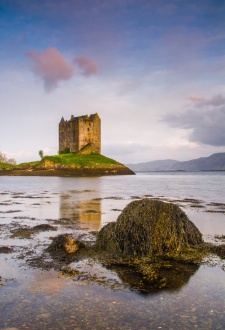 From the start, the Stewart lordship of Castle Stalker was wrapped in violence and intrigue. In 1463 Lord Stewart was murdered at his wedding at Dunstaffnage by Alan MacCoul, of the MacDougalls. Stewart survived long enough to complete the marriage and legitimise his son, Dugald. Dugald thus became the first Chief of Appin.

Just 5 years later the combined forces of Stewart and MacLaren defeated the MacDougalls at the Battle of Stalc, and Dugald himself killed his father's murderer. A memorial commemorating the battle can be seen in the Portnacroish churchyard.

James IV of Scotland stayed frequently at Castle Stalker on hunting and hawking excursions to Argyll, and it may be that the castle was expanded to suit the king. The worn coat of arms over the door may be the royal arms.

Another murder followed in 1520 when Sir Alexander Stewart of Invernahyle was killed by a party of Campbells while fishing just off the islet next to the castle. Tradition says that the nurse looking after Stewart's young son, Donald, hid the baby inside Castle Stalker.

The Campbells left without finding the child, and the nurse was able to return and retrieve her charge. When Donald grew of age he led a party of Stewarts on a raid to Dunstaffnage where they killed 9 Campbells in retribution for his father's murder.

The castle passed to the Campbells of Airds in 1620 when the 7th chief, Duncan Stewart, lost a drunken wager. The Stewarts briefly regained Stalker in 1689 but lost it again to the Campbells in 1690 after a siege lasting several months.

During the 1745 rebellion of Bonnie Prince Charlie, Castle Stalker was garrisoned by about 60 royal troops. The Stewarts of Appin attempted to capture the castle but the defensive walls proved too strong. One story says that the cannonballs fired by the besieging Stewart troops bounced back off the thick castle walls.

The Campbells stayed at Stalker until 1800, when they built a new house on the mainland at Airds. Around 1840 the roof was taken down and the castle was abandoned. In an odd twist of history, Stalker was purchased by Charles Stewart from the Campbells in 1908, and it was Stewart who repaired the castle and stemmed the process of decay that threatened to destroy it entirely. It was further restored by Lt. Col. D. R. Stewart Allward.

Modern readers are probably most familiar with Castle Stalker from its role in the film Monty Python and the Holy Grail (the island castle that appears right near the end of the film).

The castle is currently open to visitors on specified dates between May and the end of September. At other times there is no access unless you fancy swimming or taking a boat trip - but the sheer dramatic quality of the view and the romance of the location make Castle Stalker a 'must-see'.

Nearby accommodation is calculated 'as the crow flies' from Castle Stalker. 'Nearest' may involve a long drive up and down glens or, if you are near the coast, may include a ferry ride! Please check the property map to make sure the location is right for you.

More self catering near Castle Stalker >>