Electric Brae - looking down (or is it up?)

Electric Brae is a 'gravity hill' near Dunure, Ayrshire. The slope of the A719 road between Dunure and Croy Shore forms an optical illusion, making it appear that downhill is up and uphill is down.

This phenomenon was originally thought to result from a magnetic, or 'electric' force acting on objects. We now know that it is nothing more than a natural optical illusion.

The Victorians believed that the Isle of Arran was exerting a strong magnetic pull. Electricity was at that time poorly understood and many completely natural phenomena were attributed to the effects of electrical attraction.

To test the effect for yourself, pull into the well-signposted layby and park. It appears that you are parked just where the road starts to descend into Craigencroy Glen. But appearances can be deceiving; the road is actually rising slightly.

Carefully take off your handbrake and instead of starting to roll forward (down), the vehicle will start to roll backwards (uphill). Of course, it isn't rolling uphill, but it certainly does seem that way! 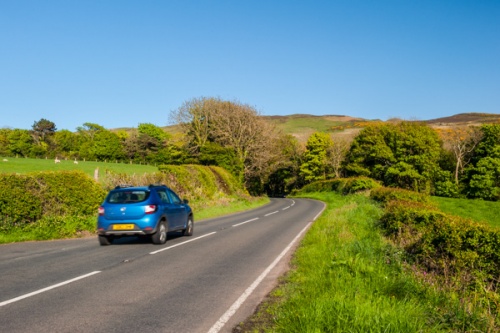 There is a stone marker inscribed with a description of the phenomenon. The inscription reads:

This runs the quarter mile from the bend
overlooking Croy Railway Viaduct
in the west (286 feet above Ordnance datum)
to the wooded Craigencroy Glen
(303 feet A.O.D.) to the east.
Whilst there is this slope of 1 in 86
upwards from the bend to the glen,
the configuration of the land
on either side of the road
provides an optical illusion,
making it look as if
the slope is going the other way.
Therefore, a stationary car
on the road with the brakes off
will appear to move slowly uphill.
The term 'Electric' dates from a time
when it was incorrectly thought
to be a phenomenon caused by electric
or magnetic attraction within the brae. The carved stone replaces several earlier metal signs that were taken by souvenir-hunters.

This is not the only 'gravity hill' in Scotland but it is the most famous During WWII the American General Dwight Eisenhower, who was headquartered at Culzean Castle, would bring guests to Electric Brae.

It is worth taking care as you travel past the Brae; visitors sometimes do daft things to experience the optical illusion, such as rolling a ball down (up) the middle of the road.

The electric Brae is well-signposted. It is on the A719 between Dunure and the minor road to Croy Shore. From Dunure take the road south in the direction of Maybole. You will see a disused railway line between the road and the shore. After just over a mile the road curves left around the hill that forms the sloping side of Craigencroy Glen. You will come to a very obvious and well-signposted layby on the left.

About Electric Brae, Dunure
Address: A719, Dunure, Ayrshire, Scotland, KA19 8JR
Attraction Type: Countryside
Location: On the A719 about one mile south of Dunure. Layby on the southbound side of the road (heading towards Maybole)
Location map
OS: NS253131
Photo Credit: David Ross and Britain Express

Nearby accommodation is calculated 'as the crow flies' from Electric Brae. 'Nearest' may involve a long drive up and down glens or, if you are near the coast, may include a ferry ride! Please check the property map to make sure the location is right for you.