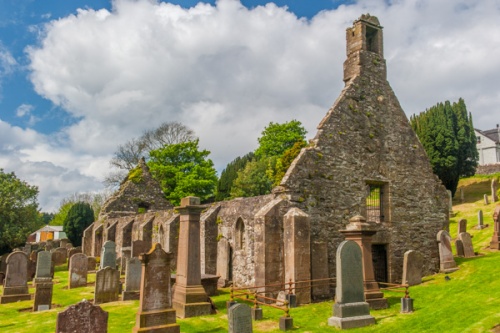 The Old Kirk in the Ayrshire village of Kirkoswald was built around 1220 and is said to stand on the site of a church erected by Oswald, the 7th-century King of Northumbria. Oswald is said to have won a battle here in AD 654 and erected the church in thanks for his victory.

In the 13th-century the monks of Crossraguel abbey built a stone church on the site of Oswald's timber building. The church was given to Paisley Abbey by the Earl of Carrick. Sadly, the medieval building now stands roofless in the centre of a large graveyard full of fascinating gravestones.

The church is laid out on a rectangular plan, measuring 93'6" x 28'4" externally and built of mortared rubble masonry. The walls are supported by later buttresses and there are modern window openings and doorways in the south wall.

In 1562 Abbot Quintin Kennedy of Crossraguel preached a sermon in Kirkoswald church against the Reformation. His sermon drew the ire of the reformer John Knox. In 1562 Knox and Abbot Kennedy engaged in a famous debate at Maybole over the Roman Catholic Doctrine of the Mass, a debate that lasted three days and ended without either side giving an inch. 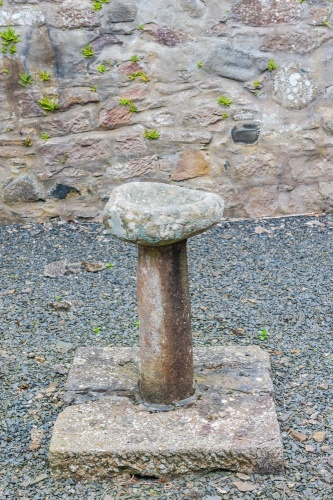 In 1777 the old kirk was replaced by the present parish church, commissioned by Thomas, 9th Earl of Cassillis. The new church was designed by architect Robert Adam, known primarily for his work on some of Britain's finest stately homes. Adam was working at the time on nearby Culzean Castle.

Inside the roofless medieval kirk is a very worn 12th-century font said to have been brought here from Crossraguel Abbey during the Reformation. If the attribution is accurate then this is the very same font used to baptise Robert Bruce in 1274. Bruce was born at Turnberry Castle but baptised at Crossraguel Abbey, two miles outside Maybole.

Kirkoswald has strong links to the poet Robert Burns and the churchyard is part of the Burns Heritage Trail. His mother Agnes was born in Kirkoswald and Robert spent 9 months attending school here in 1776. He observed local characters and later incorporated them into his poems.

Burns attended a service here in 1776 when Rev Mathew Biggar preached against the union of the Parliaments of England and Scotland.

Most people visit Kirkoswald churchyard to see a group of gravestones linked with Robert Burns. The first of these is the Brown (or 'Broun') family gravestone, marking the final resting places of his maternal grandparents Gilbert Brown and Agnes Rainie. Agnes died in May 1742 at the age of just 34. 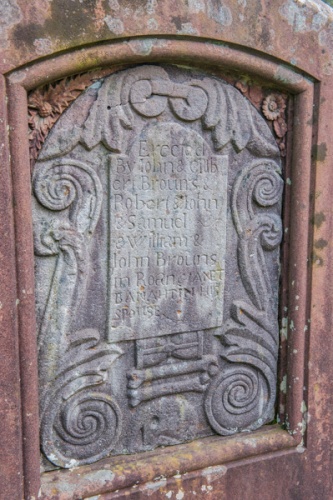 A poignant story says that when she was on her deathbed she was asked if she was sorry to leave her husband and children. She replied, 'No; I leave my children to the care of God, and Gilbert (her husband) will soon get another wife'. And this he did; he married twice more.

Next to the Brown family gravestone is the gravestone of Douglas Graham of Shanter, brought vividly to life in Burns' poem 'Tam O'Shanter'.

Near Tam O'Shanter's grave is the last resting place of Hugh Rodger, the schoolmaster who taught young Robert Burns mathematics. He was not a gifted student, but what little he did learn helped get him the post of exciseman for Nithsdale later in his life.

Outside the east end of the ruined church stands the gravestone of John Davidson, the village cobbler, immortalised by Burns as Souter Johnnie (a souter was a term for a shoemaker). You can visit Souter Johnnie's thatched cottage, which stands almost directly opposite the churchyard and is now in the care of the National Trust for Scotland. 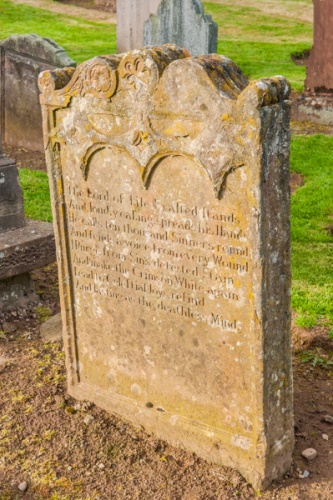 Outside the graveyard is a plaque marking the site of a pub owned by Jean Kennedy, immortalised as 'Kirkton Jean' in Robert Burns' poem Tam O'Shanter. In the Scottish Lowlands the village where the parish church stood was known as 'the kirkton'. So, Jean Kennedy was nicknamed 'Kirkton Jean'. Her inn was known locally as Leddies House' and was referred to in the poem as 'L-D's House'. Kirkton Jean's gravestone stands near the south wall of the church.

Near the east end of the church is a group of gravestone commemorating former ministers. One of these ministers was William Cupples, who edited the memoirs of John Stevenson, a local Covenanter.

Another grave is that of Scipio Kennedy, a black African slave brought to Culzean Castle by the Kennedy family in 1702. Scipio was given his freedom in 1727 and lived out his life on the Culzean estate.

The kirkyard is full of beautifully carved gravestones, some dating to the 17th century. For example, against the west wall of the churchyard is a gravestone to Mary Bekwith, who died in 1652 at the age of 22.

Kirkoswald Old Church and Kirkyard are full of interest. I highly recommend combining a visit to the Kirkyard with a visit to Souter Johnnie's Cottage. 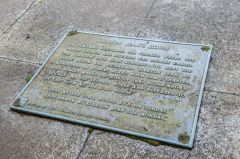 Nearby accommodation is calculated 'as the crow flies' from Kirkoswald Old Church & Kirkyard. 'Nearest' may involve a long drive up and down glens or, if you are near the coast, may include a ferry ride! Please check the property map to make sure the location is right for you.