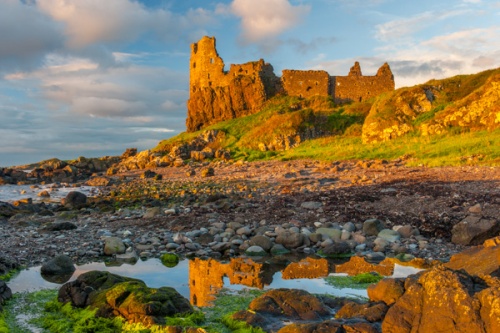 Dunure was the ancient seat of the Kennedy family, traditionally lords of Carrick and eventually Earls of Cassillis. The earliest known castle here on the edge of the cliffs was built prior to the 13th century, but the ruinous structure we see today is a century later.

Dunure was one of the major Kennedy strongholds in Carrick. Family tradition says that the Kennedys captured Dunure from the Norwegians following the Norse defeat at the Battle of Largs in 1263. The first written historical record of a Kennedy at Dunure comes from 1357, when John de Kennedy's title to estates at Dunure was confirmed. 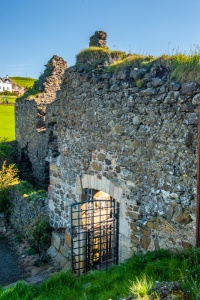 We know very little of the castle during the 14th and 15th centuries. It seems to have gradually been enlarged, transforming a simple fortified tower to an enclosed site with a hall-house protected by a gatehouse tower. To this, a later six-storey keep was added, with a south range, chapel, and outer defences to enhance the naturally strong clifftop position.

In 1429 Dunure was the site of a meeting between John Mhor Macdonald, representing the Lords of the Isles, and James Campbell, acting for King James I, to iron out differences. The meeting broke out in violence and Macdonald was killed.

James I had Campbell executed to appease the Macdonalds, but they were not pacified and launched subsequent attacks on royal outposts.

John's descendent, David Kennedy, became the 1st Earl of Cassillis in 1509, a reflection of the rising power of the Kennedy family on the national stage. But it is the 4th Earl, Gilbert, dubbed 'The King of Carrick', whose name will forever be associated with Dunure.

Roasting of the Abbot

Earl Gilbert was an acquisitive man; he used forged documents to seize land from Glenluce Abbey, then had a hired assassin murder the forger, and covered his tracks completely by having the assassin hanged on a false charge of theft. Not a man to cross. 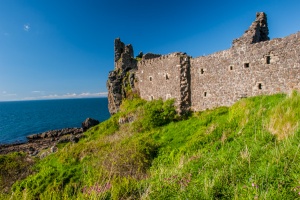 In 1563 Gilbert Kennedy entertained Mary, Queen of Scots at Dunure Castle, with feasting and celebrations lasting 4 days. But there was no celebration in 1570 when Gilbert cast a covetous eye over land owned by the monks of Crossraguel Abbey. Earl Gilbert seized Allan Stewart, the Commendator of Crossraguel, and pressured him to transfer abbey lands to the Earl.

When the Commendator refused, the Earl had him thrown into a 'Black Vault', and there twice had him roasted over a fire on a spit, until at last he gave in and signed the lands over to Gilbert.

Things got more complicated then, as Lord Kennedy of Bargany, Stewart's brother-in-law, sent his own men into the castle in secret, hoping to rescue the Commendator. The plan was discovered, and the Bargany men were trapped inside the castle.

Earl Gilbert then attacked his own castle to oust the Bargany men, and the castle sustained heavy damage during the siege. The Earl had his men dig a mine under the keep, and the defenders dismantled the battlements and dropped the stone from above like primitive missiles.

The Earl's men were gaining the upper hand when Lord Bargany appeared at the head of a band of followers, forcing the Earl to abandon his siege and release the Commendator. As for Allan Stewart, he survived to a ripe old age, though he never walked properly again, and the Earl was never brought to justice for his actions.

The castle had outlived its usefulness as a military fortress by the middle of the 17th century, and gradually fell into decay. Local traditions says that the castle was badly damaged by a fire, but it is equally possible that the castle was slighted during the Civil War period, or its stones robbed by Cromwell's men to help build the citadel at nearby Ayr in 1650.

In 1704 the Barony of Dunure passed to Sir Thomas Kennedy of Kirkhill, and the castle has passed through ha direct line of descendants ever since. 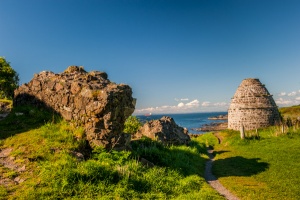 The castle was built of local whinstone, with door and window surrounds made from softer, more easily worked sandstone. Roofing slates were probably imported from Dunoon or Luss on Loch Ness. Lime was also imported, and mixed with local beach sand to make a very basic mortar, and the walls - both external and internal - were limewashed.

One of the more intriguing objects found on the site was a fragment of 2lb iron shot that was discovered embedded in the wooden door protecting the main castle entrance. It seems likely that the shot came from a light field gun like a falconet, used by Earl Gilbert during his siege in 1570.

Immediately beside the castle ruin stands a conical stone doocot, like a sentinel watching over the castle site. The doocot has space for 200 nesting boxes and probably dates to the 15th century. It would have been essential as a supplementary source of food, providing eggs and meat for castle residents during the lean winter months.

I've been to Dunure several times. It is a fascinating place to explore, though not large. There are several information plaques that explain the history of the site, tell the story of the 'Roasting of the Abbot', and explain the rather jumbled remains of the ruinous interior. The history is fascinating, and the location is superb. Come here as the sun goes down and see if you don't agree! 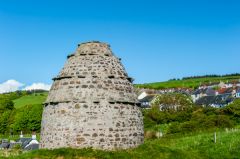 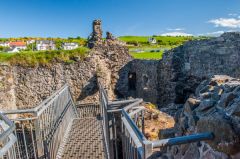 Nearby accommodation is calculated 'as the crow flies' from Dunure Castle. 'Nearest' may involve a long drive up and down glens or, if you are near the coast, may include a ferry ride! Please check the property map to make sure the location is right for you.

More self catering near Dunure Castle