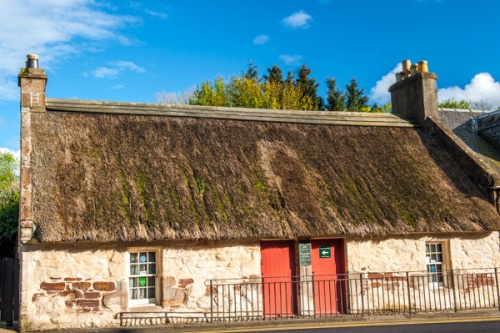 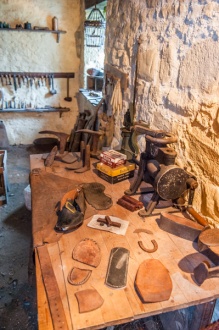 Davidson built the cottage in 1785 as a combination dwelling place and workshop. Robert Burns knew the Davidson family, having spent the summer of 1775 in Kirkoswald, and visited on numerous occasions in the following years. Burns used Davidson and his friend and neighbour Douglas Graham as models for the characters of Souter Johnnie and Tam O' Shanter in his poem.

'Souter Johnnie' lived here until his death in 1806, and the cottage stayed in the Davidson family until 1920. In 1932 the National Trust for Scotland restored the cottage to the way it would have looked during Davidson's lifetime.

There are three rooms open to visitors in the main cottage; one is a large, general purpose family room, which gives access to a smaller kitchen with a box bed.

A later addition to the rear of the cottage has been furnished as a shoemaker's workshop, with the authentic tools that Souter Johnnie used in his work. The workshop has been arranged as if Johnnie has just stepped out, with half-finished projects giving a sense of how he would have made and repaired shoes for his customers.

The interior of the cottage is furnished with a wonderful array of authentic 18th-century furniture, tools, and household implements to show how the Davidson family would have lived and worked. There is also a small collection of Burns memorabilia. 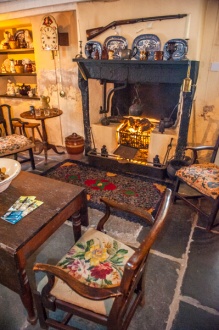 To the rear of the house is a small garden area, and a large thatched 'tavern' where you can see life-sized sandstone figures of several characters from the Tam O' Shanter poem, including Souter Johnnie drinking with Tam O' Shanter. These sculptures are copies of very popular Victorian ones now on show at the Burns Monument Memorial Gardens in Alloway, sculpted by James Thom about 1830.

The shoemaker's workshop with the real tools used by Souter Johnnie really helps the story and characters come to life. But more generally it is fascinating to see how a craftsman's family would have lived in the late 18th century. Souter Johnnie would have reasonably well-off by the standards of his day, and a well-known figure in the community, but very much working-class.

One fascinating feature that I hadn't been aware of before our visit was a small window set into the wall beside the box bed. A single candle stands on the window ledge, a reminder of the days when Kirkoswald was a centre of the smuggling trade. When excise men were spotted in the area the candle could be lit in the window as a warning to smugglers to stay clear of the house.

After you've finished exploring the cottage, walk across the road to the Auld Kirk, now a roofless ruin. In the churchyard are the graves of several characters mentioned in Burns' poems, including the gravestone of Souter Johnnie himself, as well as Tam O' Shanter (Douglas Graham) and Kirkton Jean (Jean Kennedy). Inside the church - visible through a locked gate - is the simple medieval stone font where Robert the Bruce was baptised. 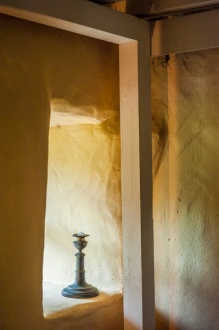 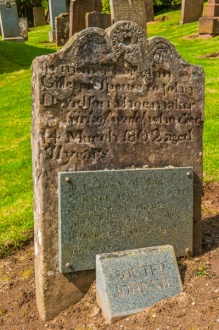 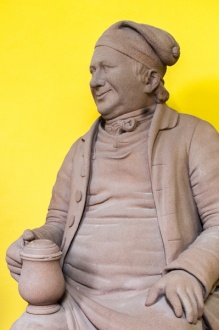 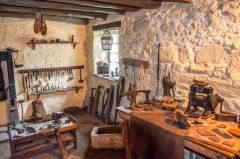 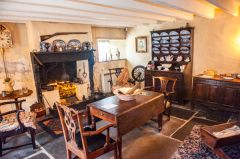 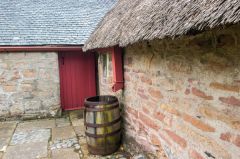 Nearby accommodation is calculated 'as the crow flies' from Souter Johnnie's Cottage. 'Nearest' may involve a long drive up and down glens or, if you are near the coast, may include a ferry ride! Please check the property map to make sure the location is right for you.