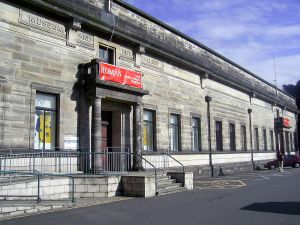 Kirkcaldy Museum and Art Gallery
The Kirkcaldy Museum tells the story of the town's industrial past and its ties to pottery, linoleum, and coal mining. The museum houses a nationally important art collection including works by the Scottish Colourists.
What to See
The museum is housed in the historic War Memorial building, left to the town by linoleum manufacturer John Nairn. The museum is themed around 24 moments in time that tell the story of Fife and the Kirkcaldy area, and of course, the lino industry is part of that story. Kirkcaldy was once the world's largest producer of linoleum floor coverings, and the collection includes samples dating back to the 1840s. One of the more unusual items is a piece of lino from Sir Paul McCartney's council house in Liverpool.

Each of the museum's 'moments' is focussed on a star artefact in the museum's collection. Among the 'moments' on display are the Beatles performance in Kirkcaldy, the restoration of the local High Street, and the opening of the Fife coal beds.

Permanent exhibits include important works by local artists, including Jack Vettriano, one of the most prominent Scottish Colourists, along with works by Samuel Peploe and William McTaggart. There are also a number of paintings by the 'Glasgow Boys' group of artists.

In the late Victorian period, Kirkcaldy was a major centre for pottery production, and the museum holds over 1000 pottery objects, including a large quantity of hand-painted Wemyss Ware. Another major collection covers the long history of coal mining in Fife. See objects that depict the daily life of miners, including unusual items of furniture made from coal.

The museum is linked to the Kirkcaldy Galleries, showcasing local art, with a local library, and archives for family history research as well as a visitor centre for the area.

More self catering near Kirkcaldy Museum and Art Gallery >>

More bed and breakfasts near Kirkcaldy Museum and Art Gallery >>