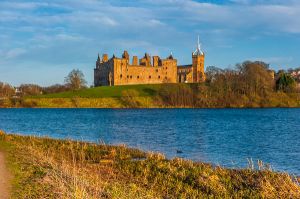 The magnificent ruin of a Royal Palace stands in its own park. Linlithgow Palace was the residence of Stewart kings and queens from James I, and both James V and Mary, Queen of Scots were born here, as was Princess Elizabeth, better known as 'The Winter Queen'.
History
Linlithgow was begun by James I in 1424 when an earlier residence on the same spot was destroyed by fire. The new palace was built for pleasure rather than defence and served as a stopping place for the royal family while travelling between Stirling and Edinburgh.

The site for the palace is a low rise above a small inland loch. The area was settled at least as early as Roman times, but it was not until the early 12th century that it came to the attention of the Scottish crown, when David I built a royal residence here. King David also helped establish a small town beside his new residence.

Linlithgow was seized by Edward I's invading armies in 1296. Edward created a pele, or fortified defensive tower. Nothing of Edward's pele now remains, but the name Peel is still used to describe the park that surrounds the 15th-century palace.

After centuries of building and rebuilding by the Stewart monarchs, the result was a magnificent palace, on a quadrangular plan, with four ranges set around a central courtyard. At the centre of the courtyard stands an ornate fountain, created by James V in 1538. The fountain rises up in three tiers like a modern wedding cake. The great hall built by James I occupies the east range, while to the south and west are the royal chapel and state apartments added by James IV.

Throughout the palace are a fabulous array of sculptures. Perhaps the most interesting are a series of angel musicians in the royal chapel.

Linlithgow Palace is very well signposted from nearby roads. There is a small parking area beside the castle and very good information panels throughout the site. One unfortunate thing when we visited was that James V's ornate fountain was being cleaned, and was covered with scaffolding and protective plastic sheets so that it was completely obscured from view. Other than that, the Palace was a wonderful visitor experience; you can climb to the top of the walls and get a superb view over the entire site. Aside from the fountain, the most impressive feature for me was the Great Hall, with its huge fireplace and carved embellishments.

I highly recommend Linlithgow Palace as a visitor experience. Please do take a few minutes to explore St Michael's church, immediately beside the Palace, and if you have time, walk around the loch below the Palace. The path beside the loch gives wonderful views of the Palace, especially on a sunny evening, when the Palace reflects in the waters of the loch, creating a mirror-image. 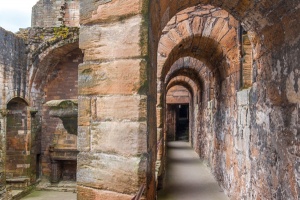 Mural passage above the Great Hall 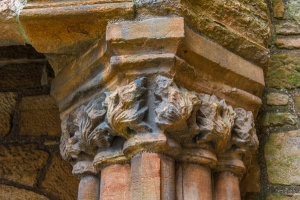 Carved capitals in the Great Hall 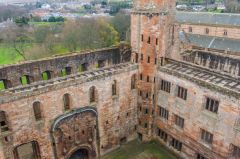 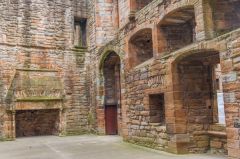 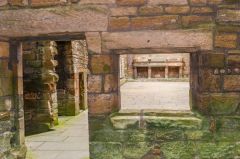 More self catering near Linlithgow Palace >> 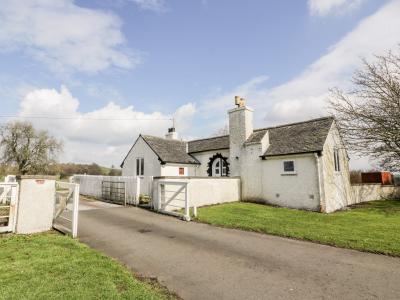