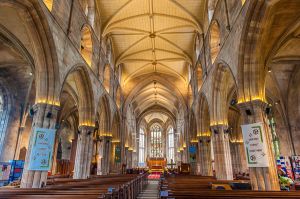 St Michael's is one of the largest and finest medieval churches in Scotland, built in the 15th century and restored several times since. The church retains its original south porch with an oriel window.
History
We do not know precisely when the first church was built at Linlithgow, but the earliest written record comes from 1138 when David I of Scotland gave the church and all its property to the Cathedral in St Andrews. In 1242 the Bishop of St Andrews consecrated St Michael's but it isn't clear whether this was in response to a completely new church or simply recognising an already existing building. Edward I captured Linlithgow in 1301 and used the church as a gigantic warehouse to store provisions.

By the time Linlithgow was recaptured following the Battle of Bannockburn in 1314 St Michael's was in dire need to repair. It seems likely that the church was restored, but that restoration was to last only a century before a fire swept the church and neighbouring palace.

It took an enormous effort to reconstruct the church, re-using many of the stones from the earlier building, and a number of new taxes were introduced to pay for the building work. Among the new fees levied locally was a tax on leather and ale, and fines collected for selling goods at inflated prices in the marketplace. The church also benefitted from gifts from every Stewart king from James I to James V.

Over 115 years had elapsed before the church was completely restored, and to celebrate the event Linlithgow was granted a royal charter and the right to name a town Provost. This right was essentially a form of self-government and a recognition of the town's status as a royal burgh.

The result of the rebuilding is one of Scotland's finest medieval churches, noted for its exterior facade with statues of saints, and a magnificent oak roof bearing the arms of George Crichton, vicar of St Michael and later to become the Bishop of Dunkeld. The church was a favourite of the Stuart monarchs, and Mary, Queen of Scots was baptised here in 1542 after her birth at the neighbouring royal palace.

The church suffered the indignity of being used as a storage place for wood in 1620, and in 1645 it served briefly as the University of Edinburgh 'campus' when faculty and students of the university were forced to flee the city an outbreak of the plague. Unfortunately, much of the medieval statuary was destroyed during the Reformation, and the Crichton roof was removed in 1812 when it became rotten. In 1823 a mort house was erected in the churchyard so that a guard could keep watch against 'resurrection men' who stole recently deceased corpses to sell to anatomy students and doctors.

Though many of the medieval furnishings inside the church were removed or destroyed at the Reformation, the late medieval architecture is superb, with slender clusters of columns supporting a nave of 5 bays and a chancel of a further 3 bays.

One of the treasures of St Michael's is a bell made in 1490, thought to be one of the oldest bells in Scotland still in use. 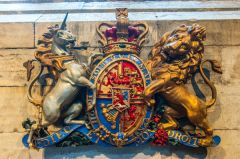 More self catering near Church of St Michael, Linlithgow >>

More bed and breakfasts near Church of St Michael, Linlithgow >>