HERITAGE HIGHLIGHTS:   The first life-size statue of Mary, Queen of Scots to be commissioned in Scotland. 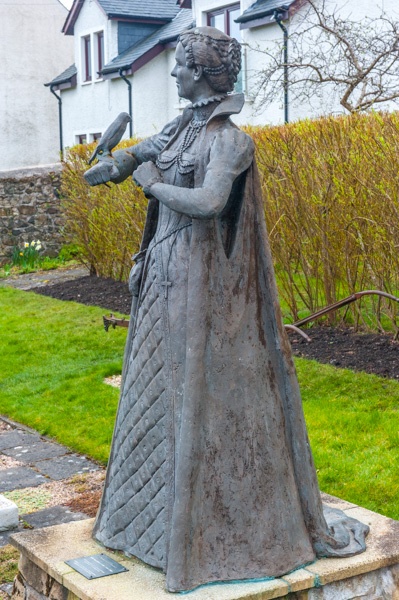 Linlithgow was once one of the most important towns in Scotland, with one of Scotland's most historic churches and an opulent Royal Palace where Mary, Queen of Scots was born. That rich history is remembered in the Linlithgow Museum on High Street, a short stroll from the gates of Linlithgow Palace. 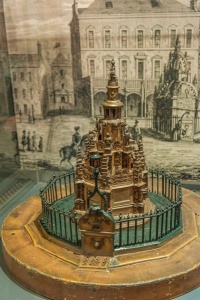 Model of the Linlithgow Cross

One of the museum highlights is the flags of the Scotch Brigade, one of Scotland's oldest infantry regiments. Another exhibit tells the story of Mary, Queen of Scots and her connection to Linlithgow. This exhibit, though small, is fascinating, for it shows how attitudes towards Mary have changed over the centuries.

Another interesting exhibit is a scale model of the ornate Linlithgow Cross, the town drinking fountain designed in 1807 by James Haldane to replace an earlier 1628 fountain.

The museum is divided into three galleries. Gallery 1 looks at Civic Life, focussing on the history of Linlithgow and the town's royal heritage. In this gallery, you will find one of the museum's major attractions, a life-sized statue of Mary, Queen of Scots, sculpted by Allan Herriot as a memorial to Tom McGowran OBE, who helped found the museum.

Gallery 2 is 'A Working Town', where you can discover the variety of trades and industries that made Linlithgow what it is today, from dyeing, explosives, electronics and pharmaceuticals. Try your hand at making your own medicine or design a banner.

The final Gallery is 'Linlithgow Life', covering social history in the area. Learn about the Linlithgow Marches, politics, education, and leisure activities. Here you can see a selection of Scotch Brigade banners, as well as the typewriter used by Tam Dalyell, who served as MP for Linlithgow for 22 years.

The museum holds regular special exhibits based on Linlithgow's people and heritage.

Our family came to Linlithgow to see the Palace, like most tourists. We saw the brown tourist sign for the museum and decided to see what it was all about. Though small, the museum is a delight. There's a lot of history packed into the three galleries.

Admission is free but a donation is welcome. As of this writing, the museum is normally open from Easter through September.

More self catering near Annet House

Self Catering near Linlithgow