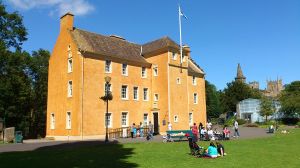 In 1635 Sir Alexander Clerk of Pittencrieff built a simple two-storey house, set on the edge of a glen which runs right through the heart of Dunfermline. In 1902 industrialist Andrew Carnegie, a native of Dunfermline purchased the Pittencrieff Estate and the house and donated them to the city.

The estate was developed into a public park, incorporating several fascinating historic sites. Among these were the remains of an 11th-century castle used by Malcolm Canmore, and a cave where William Wallace was said to have hidden from his enemies.

As for Pittencrieff House, it was extended with a pair of galleries by architect Sir Robert Lorimer and opened to the public as a combination museum and gallery.

The Museum has displays on the history of the park, its geography and geology, and on the house itself. The galleries also showcase local art and artists. A special museum display called 'Magic of the Glen' looks at the natural history of Pittencrieff, with dinosaur fossils, and a look at the wide variety of wildlife found in the park. This is very much a 'hands on' museum area, with plenty of interactive displays to bring the park and its natural heritage home to children.

Trails lead from the museum throughout the surrounding parkland, which holds a petting zoo, playgrounds, a greenhouse, and an 18th-century dovecote, in addition to the castle mound and Wallace's Cave.

We've wandered through the park, and it is extremely pleasant, with tall trees filtering the sunlight, creating a very pleasant atmosphere.

Unfortunately, the house has been closed - temorarily we hope. The official statement the Fife government administration says simply that Pittencrieff House has been closed following the opening of the Dunfermline Carnegie Library & Galleries. The Carnegie Dunfermline Trust and Fife Council 'are working to bring Pittencrieff House back in to use and secure a sustainable future for this historic building.'

We will update this page when we know more.