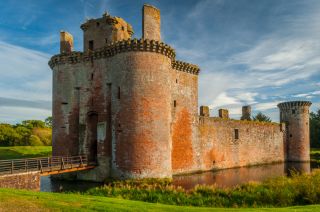 This triangular moated castle stands on the northern edge of the Solway Firth, beside the River Nith. For over 4 centuries Caerlaverock was home to the powerful Maxwell family and defended the south western approach to Scotland. It was besieged, captured, recaptured, won and lost again and again in the endless border conflicts between the English and Scots.
History
Shortly before the year AD 400, the Romans withdrew from southern Scotland. The area around Caerlaverock was then controlled by the lords of Nithsdale, and sometime around AD 950 they built a fort near the site of the present castle. The lords of Strath Nith owned land on both sides of the Solway Firth, and around 1157 the monks of Holm Cultram Abbey, directly across the firth, were granted land at Caerlaverock.

But the Scots lost control of their Cumbrian possessions by the middle of the 12th century, and Caerlaverock became a border fortress, controlling access to Scottish territory. Around AD 1200 Alexander II gave the Nithsdale lands to Sir John Maxwell, his chamberlain, and the Maxwells built what would become the 'old castle' at the point where the Teviot Burn empties into the Solway salt marshes. The original castle was simply a timber manor, but over the course of several generations they transformed the timber residence into an impressive stone fort. 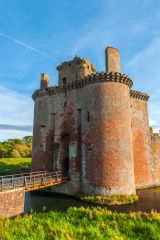 The twin-towered gatehouse
Unfortunately, the Maxwell's new castle proved too small, and it was prone to flooding, so about AD 1270 Sir Herbert Maxwell began to build a new, larger fortress several hundred metres away. This 'new' castle of Caerlaverock is one of the most picturesque - and historic - castles in Scotland. For a start, it was triangular, an extremely unusual design for Britain. The castle was surrounded by a huge enclosure, or 'castletoun', with space for stables, a brewhouse, workshops, and bakeries.

The Siege of Caerlaverock - 1300
When Edward I of England successfully invaded Scotland in 1296, leading Scottish nobles swore oaths of loyalty. Sir Herbert Maxwell was among these, but it was not long before Maxwell began to resent the influence of his English overlord. Edward invaded south eastern Scotland in 1300, and Caerlaverock Castle was a focus for his assault. The siege that followed might have been relegated to a footnote of history were it not for the efforts of an English herald, who wrote a colourful and extremely detailed account of the siege, so that now it is one of the medieval military operations about which we have the most accurate information.

The poem relates that Edward brought 87 knights and 3,000 soldiers to besiege Caerlaverock, while the defence of the castle fell to Robert de Cunningham, the Steward of Scotland's valet, who had just 60 men at his command. The English brought siege engines, and for 2 days showered the castle walls with projectiles, and attacked the gates again and again. The outnumbered garrison resisted valiantly, but ultimately they had no choice but to surrender. The poem relates how the English were astonished to see how few men had opposed their attacks. A few were hung from the battlements, but most were allowed to go free. 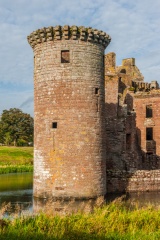 13th c Murdoch's Tower
The English held Caerlaverock until 1312. In an interesting bit of political opportunism, the keeper was Sir Eustace Maxwell, who exercised a deft ability to shift allegiance as the political wind blew. Maxwell must have seen how the forces of Scottish nationalism were shaping up, for he switched allegiance to support Robert the Bruce. He had to defend his castle from an English attack, but then Bruce ordered Caerlaverock destroyed so it could not be used by the English. But the Maxwells were supporters of the Balliols, not the Bruces, and when Edward Balliol became king in 1332, Maxwell changed sides again. He repaired Caerlaverock and threw his support behind the Balliol monarchs in their struggle with the Bruces.

The castle was rebuilt completely in 1370, and most of what we see today dates to this time. The process of restoration and rebuilding was a huge project, and it seems that work continued until the late 15th century.

John Maxwell became regent of Scotland in 1536, and James V visited Caerlaverock in 1542, just before the calamitous Battle of Solway Moss. Robert, the 5th Lord Maxwell, was captured at Solway Moss. He was released but captured again. The castle fell to an English attack in 1544 but was immediately retaken by the Scots. Another English attack took Caerlaverock in 1570, but it was soon back in Maxwell hands.

The last and most striking transformation of Caerlaverock began around 1634, when Robert Maxwell, Earl of Nithsdale, began to create an ornate Renaissance mansion within the medieval castle walls. It is this mansion that gives Caerlaverock its extraordinary split-personality; a combination of medieval solidity and 17th-century elegance and grace. The Nithsdale Lodging, as the new residence became known, is full of exquisite architectural details, with coats of arms over doorways, and curvaceous neoclassical columns adorning walls and supporting fireplaces. 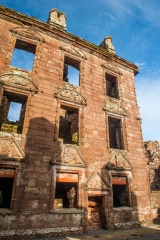 Nithsdale Lodging
south range
The Second Siege of Caerlaverock - 1640
Unfortunately, Sir Robert did not have long to enjoy his elegant new residence. Maxwell was a staunch Catholic, and in 1640 a Covenanter army under Lieutenant-Colonel John Home besieged Caerlaverock. The Earl had 200 soldiers at his disposal and managed to hold out for 13 long weeks, but he ultimately had no choice but to surrender.

The victorious Covenanters pulled down part of the castle so it could not be used against them. This time the Maxwell's defeat was permanent, and the castle quickly fell into decay, becoming a romantic, ivy-covered ruin. It passed through several owners until it was given into state care in 1946. It is now in the hands of Historic Scotland.

Visiting
What a stunning sight! Though I had seen images of Caerlaverock many times, they did not prepare me for my first glimpse of the red sandstone fortress, rising up out of its moat, surrounded by earthwork defences. It truly is one of the most picturesque and compelling castles in Britain. You approach Caetlaverock across the wide expanse of the 'castletoun', with evidence of earthworks and long forgotten subsidiary buildings on all sides.

What really draws your eye, however, is the huge twin-towered gatehouse, reached by a modern bridge that replaces the original medieval drawbridge. The western tower dates to the 13th century, but the eastern tower was heavily rebuilt in the 15th century. The elaborate gatehouse defences include projecting machicolations with slots for dropping heavy objects down onto attackers. The towers contain guardrooms at ground floor level, with storerooms and gaol cells, while the upper floors were used as the main Maxwell family residence. On the first floor are remains of a feasting hall, with living quarters above. 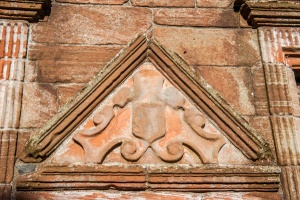 Early 17th century carved panel, Nithsdale Lodging
The arched passage through the gatehouse gives onto a cobbled yard, with the Nithsdale Lodging on the east and south. By 1634, when the Lodging was finished, defence was no longer a prime consideration, so the Lodging features large windows set into the curtain wall, to let in light and provide views across the moat. The east range rises three floors, with a two-roomed apartment on each floor. There are service chambers in the south range, with a large kitchen, a bakehouse, and a servery. These inner chambers are interesting, but it is the exterior that creates a visual feast, with ornate carvings over every doorway and window. It truly is an impressive sight to stand in the courtyard and look up at the south range.

By contrast to the Renaissance elegance of the Nithsdale Lodging, the west range and its embattled tower are starkly medieval. The tower is known as Murdoch's Tower because tradition says that Murdoch, Duke of Albany, was imprisoned here by James I in 1425 before his trial and execution in Stirling.

Behind the castle a short boardwalk trail leads through woodland to the site of the 'old castle'; the original Maxwell fortress at Caerlaverock. The castle has recently been excavated, and you can easily see the layout of the foundation walls. One thing is readily apparent when seeing the old castle foundations; it was a lot smaller than the grand, new castle!

Caerlaverock is undoubtedly one of the most satisfying castles to visit in Britain. The moated site, the unusual triangular design, the ornate 17th century Nithsdale Lodging; all these combine to create a castle that will create an indelible impression! 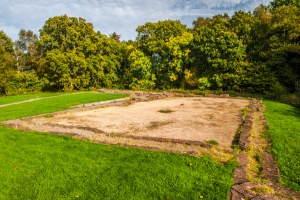 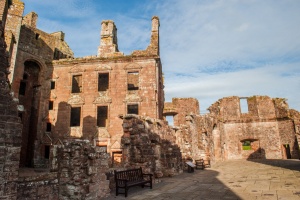 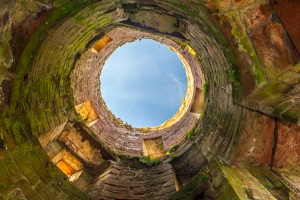 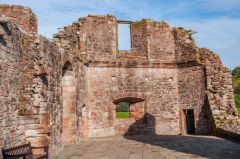 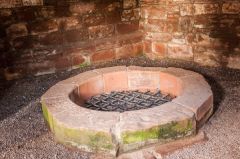 More self catering near Caerlaverock Castle >>

The Crown Hotel - 11 miles
Lochmaben, Dumfries and Galloway
Stay from: £38.00