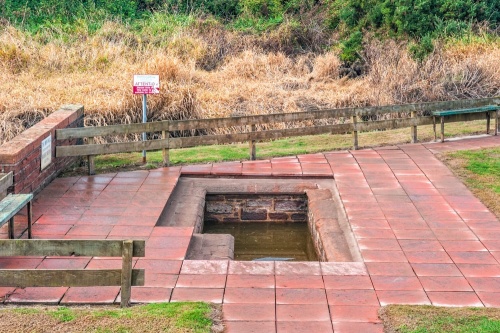 Brow Well is a mineral-rich well beside the Brow Burn, on the coast south-west of Dumfries. The well water is rich in iron and other mineral salts and has traditionally been regarded as having health-giving properties. There are two more mineral springs on the opposite bank of Brow Burn.

The well rises up through a 20th-century L-shaped tank, creating a bathing pool. The tank is made of reddish sandstone ashlar, with a set of stone steps leading down into the water. The water originally drained into the tank through a pipe with an iron cup attached by a chain so that visitors could take a drink of the mineral-laden water.

The chalybeate well waters drew visitors from Dumfries who would come to drink the water and go sea-bathing in the Solway. 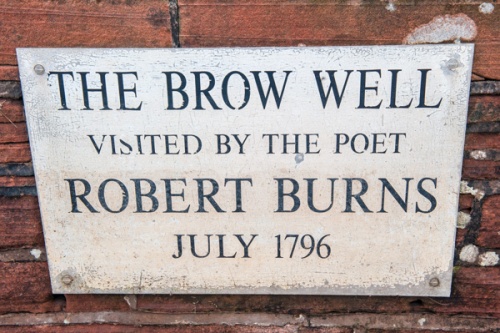 In summer 1796 poet Robert Burns was in extremely poor health, probably suffering from rheumatic fever (though he called his ailment 'flying gout').

Doctors suggested he go to the chalybeate well in the seaside village of Brow, near Dumfries and try taking the waters, sea-bathing, riding and drinking port wine. This Burns did. He arrived at the inn in Brow on 3 July, intending to stay for three weeks. Each day he would travel to the well where he would drink the well waters and wade chest-deep into the cold waters of the Solway.

At first, the treatment seemed to agree with him and he was reinvigorated, but the positive effects did not last.

He stayed alone at Brow. His wife Jane Armour was in the advanced stages of pregnancy and did not accompany him. He wrote her a letter sounding very positive about his treatment, but this was likely just an attempt to stop her from worrying. Other letters to his friends during this time make it clear that the poet knew his health was deteriorating. 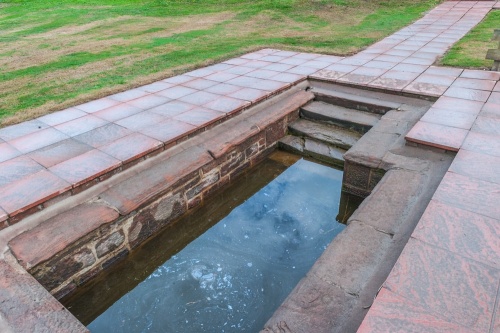 He dined one evening with Maria Ridell at Lochmaben, and she wrote that he 'had the stamp of death' on his face. Burns knew it, for he asked her, 'Well madam, have you any commands for the other world'.

On another occasion during his stay at Brow, Burns visited Ruthwell Manse to take tea with the minister. When the minister's daughter offered to draw the curtain so that the sun did not shine in his eyes Burns replied, 'Let the sun shine in upon us, my dear young lady, he has not long to shine upon me'.

The scene was poignantly recreated in a painting by Duncan McKellar, now on display at the Dick Institute in Kilmarnock. 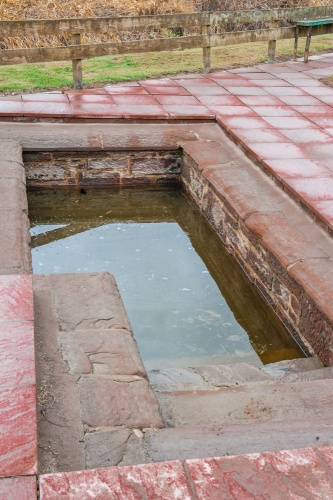 Another view of the well pool

When the spring tides passed and left the sea too far from Brow Well to be able to swim in the seawater, Burns returned to Dumfries. He died on 21 July.

The Southern Scottish Counties Burns Association holds an annual ceremony at Brow Well to commemorate the anniversary of Burns' death. 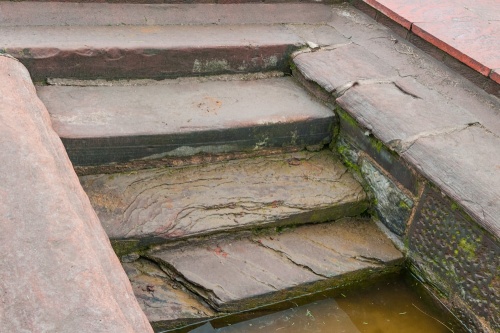 Worn stone steps leading down into the well

Visiting Brow well is very easy. The well is very well signposted and lies on the B725 coastal road 1 mile west of Ruthwell. There is a small parking area.

Lest you be tempted to follow in Burns' footsteps and sample the water for yourself there is a large warning sign advising, 'Please note that this water is not suitable for drinking'.

This is a very poignant site. The fact that Robert Burns visited Brow well so close to his death gives it an extra air of sadness. The location is wonderful, with views out over the Channel of Lochar Water and into the Solway Firth.

More self catering near Brow Well