HERITAGE HIGHLIGHTS:   The finest example of an early Christian cross in Britain 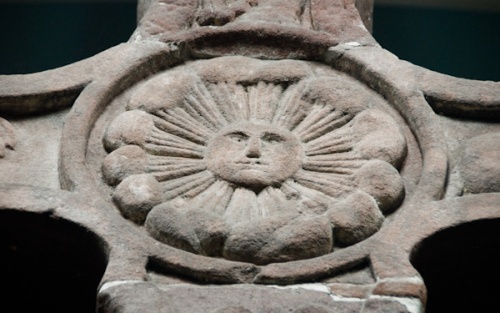 It is hard to find words adequate to describe the Ruthwell Cross; it is unquestionably one of the finest early Christian monuments in Europe, and one of the historical highlights of a visit to south-west Scotland. The Cross is a freestanding monument, dating from the late 7th or early 8th century, and is carved on all four sides with a wonderful variety of runes, animal figures, humans, and religious symbols.

The first thing you notice on seeing the Cross is the sheer size of it! It is so large, in fact, that a special, partly sunken display area had to be created within the church so that the entire cross could fit under the roof.

The carving is described by historians as being of the Anglo-Saxon Jarrow-Monkwearmouth school of sculpture. In many respects, the style of carving is identical to the cross at Bewcastle, in Cumbria.

You may be left scratching your head when you get to Ruthwell, for the Cross seems tucked away, hidden from view, within the small parish church of this Dumfriesshire village. But we should be thankful at least that the cross is out of the weather and preserved from the effects of wind and rain for future generations to enjoy. 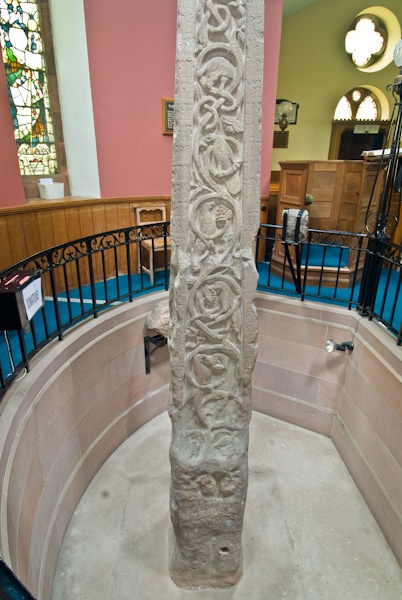 Interlace pattern on the cross' side

According to historical reports, it stood for many years near the Solway shore, but at some point prior to the 17th century, it was moved inside the church. It was thrown down and broken in 1642 during the religious turmoil of the Scottish Reformation because the Church of Scotland General Assembly thought that the carvings represented 'idolatrous' Catholic images. And though the damage caused was great, it could have been a lot worse if not for the efforts of the vicar, a man named Rev. Gavin Young, who recognised the historic importance of the cross and made sure that it was broken up with the least possible damage.

For over 180 years the fragments of the cross lay in the churchyard until in 1802 they were moved the garden of the manse, where they were reassembled in 1823. The cross's final move came in 1887 when it was moved once more under cover within the church. 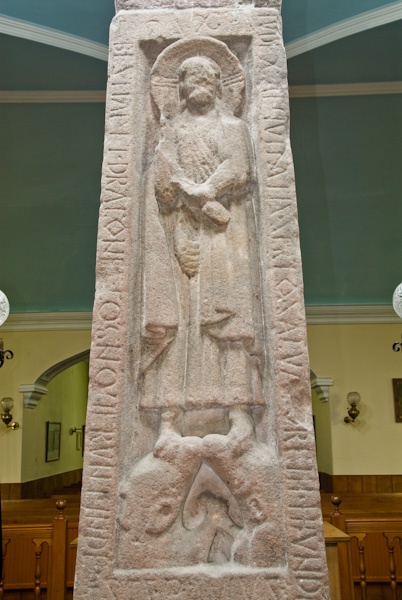 The cross is carved with a mixture of New Testament scenes and Runic characters. On the south side these scenes include St. John the Evangelist and the Eagle, The Archer, the Visitation with Mary & Elisabeth, The washing of Christ's feet, Healing the blind man, The Annunciation, and The Crucifixion.

On the north side are depicted a Bird of Peace, a pair of Evangelists, the Agnus Dei (Lamb of God) with John the Baptist, Christ in Majesty standing on two animal heads, Paul and Anthony, and the Flight into Egypt. There is a Latin inscription with the Christ in Majesty figure, and Runic symbols from the Dream of the Rood run down the edges.

What do the carvings mean?

In 1840 an archaeologist named JM Kemble, working with the British Museum, published a scholarly work with the title 'The Runes of the Anglo-Saxons.' Kemble's work investigated Runic 'writing' from several sources, and determined that it was a special form of communication reserved for sacred purposes. Runic writing appears to have been used from the 5th until the 12th centuries when it fell out of use.

According to Kemble's explanation, the Ruthwell Cross was used to express the early English poem, The Holy Rood - a Dream, often attributed to the 7th-century shepherd poet, Caedmon (658-680AD). The Ruthwell Cross, then, is perhaps the earliest example of English literature in existence.

The Runic symbols have been translated thusly:

God almighty stripped himself,
when he wished to climb the cross
bold before all men.
to bow I dared not,
but had to stand firm

I held high the great King,
heaven's Lord. I dared not bend.
Men mocked us both together.
I was slick with blood
sprung from the man's side.

Christ was on the cross.
But then quick ones came from afar,
nobles, all together. I beheld it all.
I was hard hit with grief; I bowed to warriors' hands.

Wounded with spears,
they laid him, limb-weary.
At his body's head they stood.
There they looked to heaven's Lord.

Thanks to the BBC Scottish history website for the translation.

Another theory is that the cross was erected as a protest by monks following Celtic Christian practise, against the influence of Roman Catholicism following the Synod of Whitby. That might suggest that the cross was made in 664 AD, when Colman, Bishop of Lindisfarne, and his followers, left Whitby and returned home. Full of dismay at the triumph of the Catholic bishops at Whitby, they may have erected a preaching cross at Ruthwell as one of a series of similar crosses in south-west Scotland.

A painted plaster cast of the cross is on display at the Manchester Museum. It is somewhat disconcerting to see the brightly coloured, painted carvings, given that there is no apparent trace of paint on the original, but that's a minor quibble!

Leaving aside its historical and literary importance, the Ruthwell Cross is a magnificent piece of art; the carving is superbly executed and is wonderful to behold. It truly deserves its reputation as one of the most important early Christian monuments in Britain.

Ruthwell Church key can usually be obtained from the manse next to the church.

More self catering near Ruthwell Cross >>

The Village Inn and Kirtle House B&B - 8.9 miles
Kirtlebridge, Dumfries and Galloway
From: £30.00 This single-storey cottage rests in Ruthwell, near Annan, in Dumfries and Galloway and can sleep four people in two bedrooms.
Sleeps 4