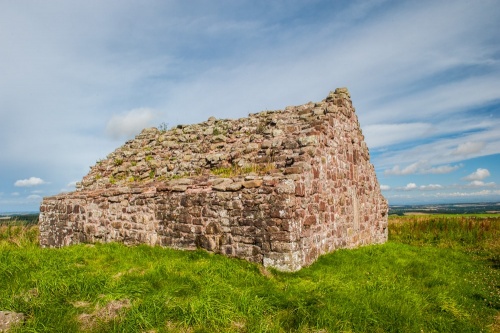 The Soutra Aisle is all that remains of one of the largest and most important medieval hospitals in Scotland. The House of the Holy Trinity at Soutra was founded around 1160 by Malcolm IV as an Augustinian hospital, monastery, and church serving travellers, the poor, the sick, and the aged.

The site for such a grand hospital might seem odd at first glance, but the monastery was sited beside Dere Street, the old Roman road which was still the main road linking Northumberland with south-east Scotland well into the medieval period.

The Soutra Hospital enclosed an area of over 700 square metres, making it perhaps the largest medieval hospital in the country, and certainly one of the best endowed. Such a large establishment requires a large amount of money to operate, and Soutra was well provided for; Malcolm granted the Augustinians large estates, and this revenue was augmented by grants from grateful benefactors.

But what goes up must come down, and in the case of Soutra, the 'down' was abrupt and catastrophic. In 1460 the Master of the hospital was one Stephen Fleming. Fleming was accused of a variety of offences and reported to Papal authorities. The Scottish Crown seized Soutra's estates and granted them to Trinity College Hospital in Edinburgh.

Ironically, it was the grant of these rich estates that enabled Trinity to create a legacy of medical research and practice for which Edinburgh became famous. But the loss of revenue proved a dreadful blow for Soutra. From an international centre for medical care, it lapsed into a local charitable establishment, in which feeble state it lasted until about 1650. 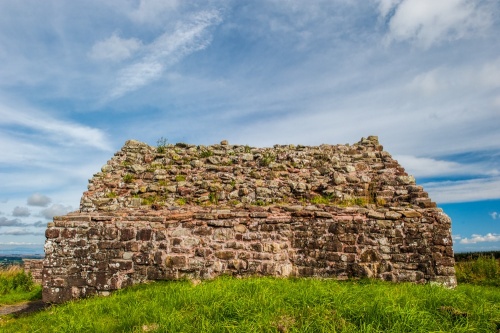 The Aisle from the south

The famous hospital and monastic buildings might have been lost forever, but in 1686 the Pringle family of Soutra/Beatman's Acre decided to use part of the church as a family burial vault. Only this small section of the original monastic church remains to give us some sense of what the original medieval hospital must have been like.

The nature of that hospital has been the subject of an ongoing 'archeo-medical' research project, which in layman's terms means that historians have been digging up the site and seeing what the remains can tell them about medieval medical practices. Results so far show that medicinal products from all over the world were used here, including hemlock, opium poppy, cloves, and black henbane.

The old Roman road of Dere Street passes beside Soutra Aisle on its way from Corbridge, Northumberland, to Cramond on the Firth of Forth. This stretch is one of the best-preserved sections of the road.

Though the Aisle is signposted from the A68, the actual site is poorly signed - we drove right past it before realising that what we thought was a cattle byre was actually the Aisle. An unsigned parking area is in a wooded clearing about 100 yards south of the Aisle, across the road. There is a very, very thorough information panel, explaining the history and significance of the Soutra site.

One point that the information board was at pains to point out is that the Aisle we see today is NOT the remnants of the medieval hospital or church, as is sometimes claimed. Rather, it is a burial aisle built using a small amount of medieval masonry from those buildings (perhaps 10%) mixed with local rubble. It is useful to point out that the Aisle is generally locked, so you cannot go inside; you have to be content with peering through the iron gate into the dim interior.

A short trail downhill, near the parking area, leads to the site of Dere Street Roman road, though in truth the road is not easy to pick out amid the bumps and lumps in the farm field! 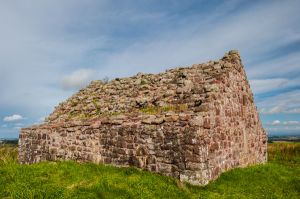 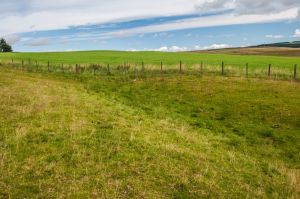 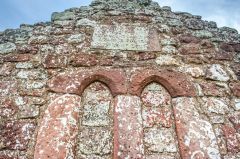 About Soutra Aisle
Address: B6368, Fala, Borders, Scotland
Attraction Type: Historic Church
Location: On the B6368. Signposted off the A68 south of Dalkeith and Fala. Parking nearby.
Location map
OS: NT452584
Photo Credit: David Ross and Britain Express

More self catering near Soutra Aisle >>