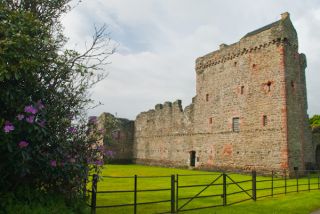 Skipness is an early 13th-century castle standing on the north east coast of the Kintyre peninsula, looking across Kilbrannan Sound to the Isle of Arran. The castle was built by the leader of the MacSween clan, at a time when this area of Argyll was under Norwegian rule, making it one of the very first true castles to be built in Scotland. The most likely builder was Suibhne (Sven) ‘the Red’, the founder of Clan MacSween, or his son Dugald.
The MacSween castle consisted of a two-storey hall house with a separate chapel. Skipness was not overly developed at that time, for the main seat of the family was at Castle Sween, a late 12th-century castle also built by Sven the Red. Another MacSween fortress is almost visible from Skipness, across the Sound at Lochranza. The MacSweens used both castles to control this area of Argyll.

The MacSweens had to surrender Skipness when the Norwegian force under Hakon was defeated at the Battle of Largs in 1263. Castle Skipness then passed to the MacDonalds, who were probably responsible for adding the strong curtain wall with its distinctive crosslet-arrowslits and crenellations. They also added a new chapel a short distance away, linked by a looping trail to the current castle. The new Kilbrannan Chapel enclosed an earlier, redundant chapel dedicated to St Columba. Within the chapel is a small collection of finely carved grave slabs.

In 1493 the MacDonalds lost Skipness to the Campbells, earls of Argyll. It was under the Campbells that an impressive tower house was built in the north east corner of the castle enclosure. But by 1700 Skipness was abandoned, and it has mouldered away for the past three centuries.

The castle is well worth exploring, but please do take the time to stroll to the chapel by the shore. The carved stones (some protected beneath a solid cover) are well worth visiting. The location, looking across the Arran, is simply marvellous.

About Skipness Castle
Address: B8001, Skipness, Kintyre, Argyll and Bute, Scotland
Attraction Type: Castle
Location: On the B8001, on the north east coast of Kintyre. The castle and chapel are open access at any time, while the tower is open only from April to September.
Website: Skipness Castle
Historic Scotland
Location map
OS: NR910575
Photo Credit: David Ross and Britain Express

Nearby accommodation is calculated 'as the crow flies' from Skipness Castle. 'Nearest' may involve a long drive up and down glens or, if you are near the coast, may include a ferry ride! Please check the property map to make sure the location is right for you.

More self catering near Skipness Castle >>