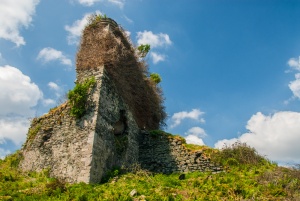 The beautiful fishing village of Tarbert lies on East Loch Tarbert, linked to Loch Fyne. The village is known for its pretty natural harbour, where working boats and pleasure craft bob at anchor. Soaring over the harbour is historic Tarbert Castle, known for its links with Robert Bruce and the early days of Scottish independence.

There was almost certainly a fortification on the hill in the 8th century, for the Annals of Ulster tell of a fort burned by King Selbach in AD 712 and again by his son Dungal the Violent in AD 731.

The first stone structure we know of was built in the 13th century, though it is very possible there was a fortification of some sort much earlier. It was probably built by Alexander IUI, or his son, Alexander III. The 13th-century fortress consisted of 4 ranges of buildings around a central courtyard. In one corner of the courtyard you can see a cistern, or well.

Edward I of England seized the castle when he claimed the Scottish crown. In 1292 he granted the castle to John Balliol. When Robert Bruce seized the crown - and dealt with Edward and his son, Edward II - he took the castle for his own. 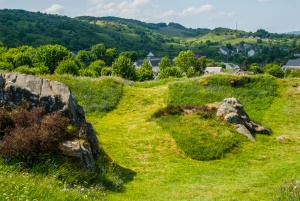 From 1325 Bruce reinforced the 13th-century fortifications with an outer bailey and drum towers built into a curtain wall. Bruce probably needed to reinforce the castle to deter the MacDonald Lords of the Isles from exerting control over the western fringes of his territory.

Bruce's Exchequer Rolls dealing with the work at Tarbert Castle is one of the oldest and most important historical documents in Scotland. The records, written in Latin, show that the castle was more than just a single structure; it had workshops, a chapel, brewhouse, dwelling houses, and a hall.

Outside the castle walls were still more buildings, including a mill. Bruce obviously intended the castle to be self-sufficient and spent a lot of time and money on its construction. He also built a pele tower at West Tarbert, with a road linking the tower to the castle.

In the last decade of the 15th century, James IV embarked on a campaign to break the power of the Lords of the Isles. In 1494 he repaired the castle and built the Tower House, now the best-preserved part of the castle complex. James installed artillery at Tarbert and installed a strong garrison. He also summoned Parliament to meet him at Tarbert Castle.

Despite its strong connections to the Scottish crown, the castle was allowed to fall into decay in the 17th century. By the early years of the 18th century it was recorded as a ruin. That did not deter the McAlister family of Tarbert, who took up a lease from the Campbells in 1705. By 1760 the castle had been allowed to decay again, and much of the stone was robbed for local building projects. 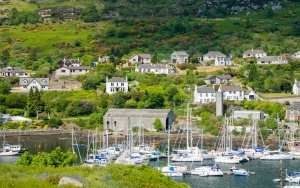 Tarbert harbour from the castle

The castle is now owned and operated by the Tarbert and Skipness Community Trust. The trust uses a herd of Hebridean black sheep to keep the castle grounds from getting overgrown. Of course, sheep do leave droppings, so sensible footwear is a good idea. The Trust is also creating a community woodland behind the castle, planting rowan, birch, willow, hazel, and alder, along with wildflowers.

Tarbert Castle is only accessible by a signed trail from the harbour. The trail is signposted off Harbour Road, on the south side of the quay. The path ascends a series of steps and climbs up the castle hill. The going is fairly steep, but a reasonably fit person should have no trouble at all reaching the castle. The are picnic areas near the castle ruins, and signposted walks up the hill. The castle also lies on the Kintyre Way long-distance trail.

I must mention the views; the castle hill provides a superb vantage point for looking down on the harbour below. It is one of the prettiest sights in Kintyre, and worth the climb on its own.

Since I visited Tarbert Castle much has changed. A local charity group has stepped in and undertaken a major restoration of the tower house and added information boards to help improve the visitor experience. No longer is the tower house crumbling and covered with foliage. It has undergone a remarkable transformation and is now more accessible and it is easier to understand the history of the site. We'll be revisiting the castle and updating our photos as soon as we can. 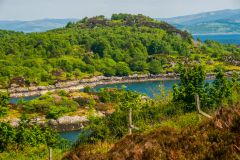 Nearby accommodation is calculated 'as the crow flies' from Tarbert Castle. 'Nearest' may involve a long drive up and down glens or, if you are near the coast, may include a ferry ride! Please check the property map to make sure the location is right for you.

More self catering near Tarbert Castle

Self Catering near Tarbert