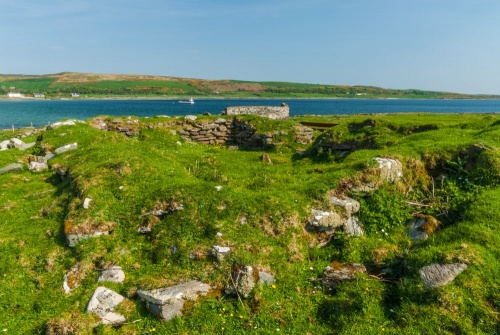 On a long, curving spit of land at the northern edge of St Ninian's Bay stands the turf-covered remains of an early Christian chapel, thought to have been established in the 6th century by monks from Whithorn, on the Solway coast.

The chapel stands within a circular enclosure that was used as a pagan burial site long before the arrival of Christianity. It remained in use until the arrival of the Norse in the 9th century, when the site was abandoned. It may have remained the focal point for a cult of worship throughout the medieval period. 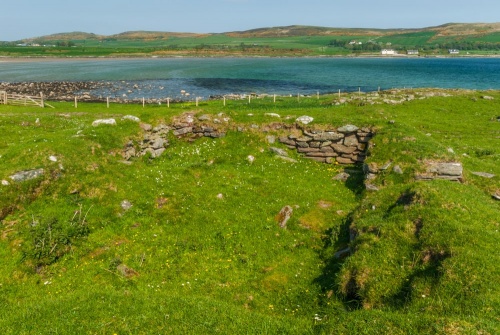 The first known use of the St Ninian's Point site dates to at least the Bronze Age. There were multiple burials here, many orientated on a North-South axis. These burials were of the 'long cist' type, that is, elongated pits lined with stone slabs. A circular enclosure was later built, but it did not include all the burials.

The enclosure was made of stone and turf and was roughly 72 feet in diameter (22m). This enclosure wall was at least 3 feet high and 3 feet thick (roughly 1m x 1m). No evidence now remains, as the top of the wall was at or below current ground level.

Two middens (offal piles) grew up outside the SE wall, and another on the SW. Shells and animal bones were found amidst the midden remains, but no pottery sherds which might indicate a date. 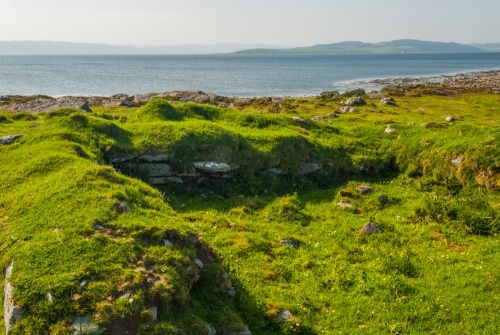 Sometime in the late 6th or early 7th century, monks arrived from Whithorn to establish a chapel, or oratory, within the earlier pagan burial ground enclosure. We can speculate that they chose this site because it was already of importance to local residents.

The chapel measures 21 x 13 feet (6.4m x 4m) and its walls are 4 feet (1.2m) thick. There is an off-centre door opening in the south wall. Inside the chapel is an altar made of rough masonry supported by stone slabs.

The chapel walls were constructed of small stones gathered along the shore, combined with local slate, bound together by a mortar of red clay.

Archaeologists investigating the chapel in 1957 found a cavity, or fossa made of stones, incorporated into the south side of the altar. This is thought to have been a space for holy relics. Unfortunately, later archaeologists found that the niche had disappeared and there is no trace of it today. 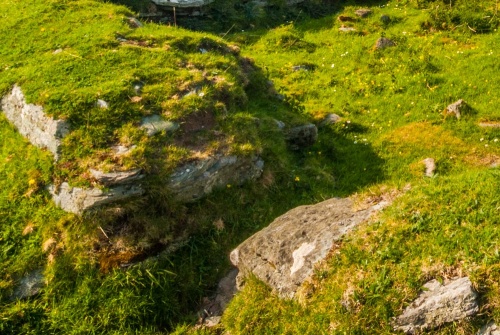 From Rothesay take the B878 west, then join the A844 towards Ettrick Bay. Turn off onto the minor road to Straad, and park at the end of the road. There is an obvious signposted trail that skirts the northern edge of St Ninian's Bay.

You pass a pair of standing stones immediately beside the trail, and find yourself on the narrow peninsula leading to St Ninian's Point. You will find the turf-covered remains of St Ninian's Chapel a stone's throw from the tip of the Point, close to a lonely pair of buildings.

Nearby accommodation is calculated 'as the crow flies' from St Ninian's Chapel. 'Nearest' may involve a long drive up and down glens or, if you are near the coast, may include a ferry ride! Please check the property map to make sure the location is right for you.