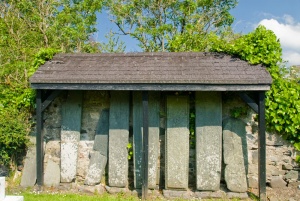 The village of Clachan is near the north western tip of Kintyre, and served for many years as the ecclesiastical centre for north Kintyre.

The church was built around 1760 to replace an earlier building. Fragments of stones on the site suggest a very early Christian church, possibly dedicated to Columbanus, a disciple of St Columba.

The age of the first church at Clachan is uncertain, but it must have been an ancient foundation, given the importance of Clachan as a church centre and the early dedication.

The importance of Clachan is emphasised by a number of very worn early medieval grave slabs in the churchyard. The best of these have been gathered together under a lean-to in one corner of the churchyard to protect them from the weather.

One of the sword slabs also shows a pair of what appear to be hounds near the sword hilt. One slab shows an extremely well-carved side, decorated with a regular pattern of rectangles. Though most of the stones are very worn, the quality of the carving is striking.

Many of the grave slabs are thought to commemorate the chiefs of Clan McAllister. Against the churchyard wall is an unusual carved stone with a Latin cross beneath a ring cross, both joined to a common stem.

Though not as impressive as the grave slabs displayed at Saddell Abbey on the east coast of Kintyre, I quite enjoyed visiting the Clachan stones. Many of them are quite worn with time, but the setting is impressive and the village is quite pretty.

Balinakill House, near the church, was the home of Coll McAlester, who in 1739 led a group of settlers to Cross Creek in North Carolina.

Balinakill House was also the home of Sir William Mackinnon (1823 - 1893), a native of Campbeltown who began as an apprentice to a grocer and became in time a wealthy shipowner. Mackinnon founded the British India Steam Navigation Company and the Imperial British East Africa Company, and left money in his will to 'provide a decent education to deserving Highland lads'.

The result was the Keil school in Dumbarton, which closed in 2000. Mackinnon is buried in the churchyard at Clachan and his birthplace in Campbeltown in marked by a commemorative plaque.

On Dunskeig hill, outside the village, are a series of three hill forts, one of which is vitrified. 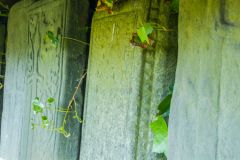 Nearby accommodation is calculated 'as the crow flies' from Clachan Church Grave Slabs. 'Nearest' may involve a long drive up and down glens or, if you are near the coast, may include a ferry ride! Please check the property map to make sure the location is right for you.