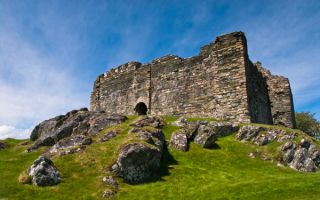 The ruins of a late 11th or early 12th-century castle built by Suibhne, lord of Argyll, stand on a rocky knoll in southern Knapdale. Castle Sween changed hands multiple times over the medieval period, passing in turn from the MacSweens to the MacDonalds, to the MacNeills, and the MacMillans. The MacDonalds recaptured Sween in 1647 and slighted the castle, making it uninhabitable.
History
No one really knows when the first castle was built here on the western coast of the Knapdale peninsula jutting south towards Kilmory. It may have been before 1100, which would make Castle Sween the oldest stone castle in Scotland.

The builder was Suibhne the Red (sometimes called Sueno, or Sven). Suibhne was just one of many local rulers along the west coast of Argyll, an area warred over by Norse, Gaelic, and Irish warlords. The location was perfect for the warships favoured around 1100; rather than the deep anchorages needed by later medieval vessels, the longboats used by the warriors of Argyll had shallow bottoms. The sandy beach at Castle Sween was perfectly suited to these 'birlinns', or galleys, which could simply be hauled up on the shore. 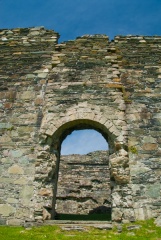 The main castle entrance
Though the builders came from a Norse background, the castle owes a lot to newer Norman military architecture; it is built on a quadrangular plan, with the high, thick walls reinforced by Norman-style buttresses. The walls are 2 metres thick in places and rise 8 metres high. There is a main entrance to the south through a large arched doorway, and a small postern gate in the west wall giving access to the beach, where boats would have been moored.

From his base here, Suibhne built a sizeable lordship along the coast of Argyll and Lorn. He also gave his name to his descendants, who called themselves MacSween.

The MacSweens lost the lordship of Knapdale to the Stewart Earls of Menteith in the late 13th century. Around the outbreak of the Scottish Wars of Independence the castle passed to the MacDonalds, who made the castle one of their major power bases in extending the Lordship of the Isles. They added towers in the 15th century and a large barracks for housing soldiers. 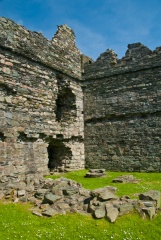 The castle interior
But the Lordship of the Isles was broken by James IV in 1493 and the king granted Castle Sween to his Campbell supporters. Colin Campbell, the 1st Earl of Argyll, was handed the stewardship of Castle Seen on behalf of the crown. The Campbells held the fortress until the 17th-century wars of religion. They supported the Covenanters, so Castle Sween made a prime target for royalist supporters.

The Destruction of Castle Sween
Irish adventurer Alasdair MacColla led a band of 1600 mercenaries along the Argyll coast, nominally in the interests of the Royalist cause. In 1644 they attacked Castle Sween and destroyed it utterly, leaving the roofless shell we see today. The castle has never been restored, though it is maintained and preserved by Historic Scotland.

Visiting
The castle is rather bizarrely located immediately behind a popular holiday park. When I arrived there were children playing in the park, a gardener mowing between trailers, and all the general hubbub of a holiday resort. Yet if you walk through the park, following signs, you reach a rocky outcrop, with green lawns sweeping up to the castle itself. The location looking across Loch Sween to Danna Island is fantastic, though the noise of the holiday park is ever-present. 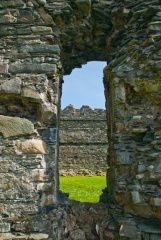 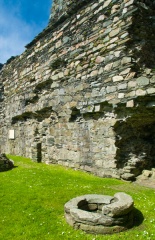 The castle well and wall 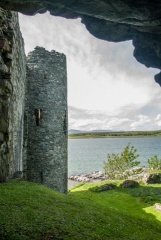 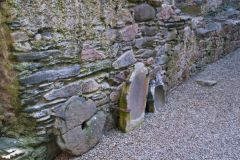 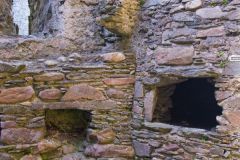 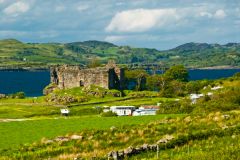 About Castle Sween
Address: Lochgilphead, Argyll and Bute, Argyll and Bute, Scotland
Attraction Type: Castle
Location: In an isolated and scenic setting about 10 miles down a minor road off the B841, on the east shore of Loch Sween, in Knapdale; about 15 miles south west of Lochgilphead
Website: Castle Sween
Historic Scotland
Location map
OS: NR713789
Photo Credit: David Ross and Britain Express

Nearby accommodation is calculated 'as the crow flies' from Castle Sween. 'Nearest' may involve a long drive up and down glens or, if you are near the coast, may include a ferry ride! Please check the property map to make sure the location is right for you.

More self catering near Castle Sween >> 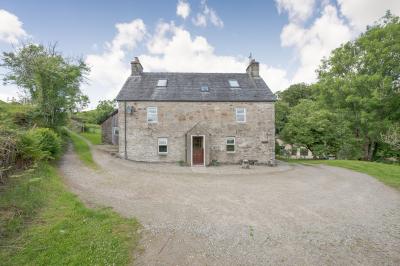 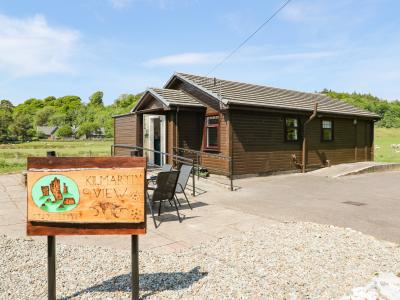 This detached lodge rests in Poltalloch near Lochgilphead, Argyll and Bute and can sleep five people in three bedrooms.
Sleeps 5