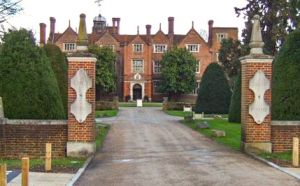 Great Fosters
One of the finest Arts and Crafts gardens in Europe grace the grounds of this Elizabethan house in the heart of Windsor Forest. Great Fosters is now a hotel, but the gardens remain for all to enjoy, bordered on three sides by a Saxon moat.

The history of Great Fosters goes back to the early 6th century when a moat was built around the manor house of Imworth. The Saxon manor is still in existence, though the house has been rebuilt numerous times since then. In 1523 the property was owned by Hugh Warham, or Wareham, whose son, also named Hugh, was knighted in 1553 when Mary came to the throne. We can safely assume that the second Sir Hugh was Catholic, and it was probably he who built the current house, known simply as Fosters.

Unfortunately for Sir William, he fell into debt and his manor was seized by his creditor, Jasper Palmer. The estate was sold several more times before ending up in the Bowtell family. The Bowtell heir to Fosters was forced to hand over the property by his brother-in-law, Thomas Owen.

Though Owen owned the house, it seems likely it was used as a royal residence and hunting lodge by Henry VIII. Princess Elizabeth, later Elizabeth I, spent time here as a child, and later used it herself for hunting. Over the porch is a royal coat of arms dated 1598, signifying the royal connection. That connection is amplified in the Anne Boleyn Room, where Queen Anne Boleyn's personal crest and royal symbols are used.

In 1604 Sir John Denham bought the manor and created the house we see today, incorporating parts of the original building. The next significant owner was Sir John Doderidge, a prominent lawyer, Solicitor General, and judge. He was nicknamed 'The Sleeping Judge' for his habit of carefully considering cases with his eyes closed. Doderidge was also one of the first members of the Society of Antiquaries and may be responsible for the sundial in the garden. The same sundial is also rumoured to have been a gift from Sir Francis Drake.

During the Civil War, the house was owned by Sir Robert Foster, a supporter of Charles I. Foster left his wife in charge of the estate and left to follow the king. In his absence, Parliamentary troops stayed at Fosters several times and plundered the house. The house did not fare much better in the following century when the tenant, Sir Charles Orby, followed the Jacobite cause during the 1715 rebellion, and the property was searched by the government for horses and arms.

In 1818 Great Fosters was sold to Dr Furnivall, a founder member of the Royal College of Surgeons. Dr Furnival had revolutionary ideas on the treatment of mental illness, and for a time the house served as a lunatic asylum. King George III may have been housed at the Great Fosters asylum during his treatments for insanity. Certainly, Dr Furnival was later knighted for unspecified 'Services to the Crown'.

The estate was later used to house a large poultry farm and to breed spaniels. In the period between the wars, the house was converted into a luxury hotel, a role it fulfils today.

The gardens are designed to imitate the effect of a Persian carpet, with intricate formal patterns. At the centre is the Drake Sundial, which dates to 1589 and is owned by the descendants of Sir Francis Drake. There is a turf amphitheatre cut into the hillside, and a sunken rose garden to enjoy.

The main formal gardens were laid out in the 1920s, with a knot garden bounded by clipped yew hedges. An Oriental bridge draped with wisteria crosses the moat, and leads to the rose garden. One of the garden highlights is the Archery Pavilion, built in the 1920s and restored in 1998.

Swimming pools are not usually a notable garden feature, but at Great Fosters they are worth mentioning; the pool was designed in the 1930s, and features a set of peculiar bathing boxes that have been named 'listed' buildings in their own right for their heritage interest.

The gardens are open daily year-round, and refreshments are available in the hotel.

More self catering near Great Fosters >>