HERITAGE HIGHLIGHTS:   One of the finest Elizabethan houses in Britain 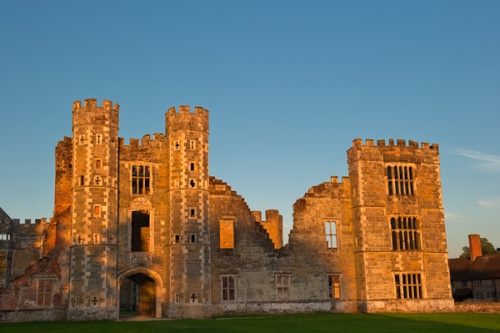 The glorious ruins of a Tudor mansion stand beside a stream, on the site of a 13th-century house. In its day Cowdray was home to one of the most powerful families at the courts of Henry VIII and Elizabeth I. Ruined by a fire in 1793, Cowdray is a shell, but what a shell! The Tudor facade is one of the most imposing and impressive in the country, and the inner courtyard is entered through a fabulous ruined gatehouse.

The history of Cowdray reads like a history of Britain, or a novel of historical romance, full of invading Normans, kings, queens, prophetic curses, fire, family feuds, imprisonment, intrigue, and rebellion.

The Norman lord Savaric leased estates at Midhurst and Easebourne from Henry I in 1106. Savaric's son Geldwin built a fortified manor on St Ann's Hill, where ruined foundation walls of a later medieval castle remain. In 1284 a descendant of Geldwin, Sir John de Bohun, built a new family home at Coudreye, on the site now occupied by the Cowdray ruins. In 1305 Sir John's home was visited by Edward I and his son, the future Edward II.

Fast forward over 190 years to 1496, when Sir David Owen, the great-uncle of Henry VIII, gained Coudreye through marriage into the Bohun family. Owen lived peaceably at Coudreye for over 2 decades, but around 1520 he began to tear down the old medieval house and rebuild in grand style. Owen called his new house Cowdray.

After Owen died the house passed to Sir William Fitzwilliam, and in 1533 Sir William obtained a license from Henry VIII to crenellate the house. Sir William enjoyed royal favour - at the Dissolution, Henry gave him Easebourne Priory in addition to other monastic estates and named him Earl of Southampton on the birth of Henry's son, Edward VI. Henry himself visited Cowdray in 1538 and again in 1539 and 1545. 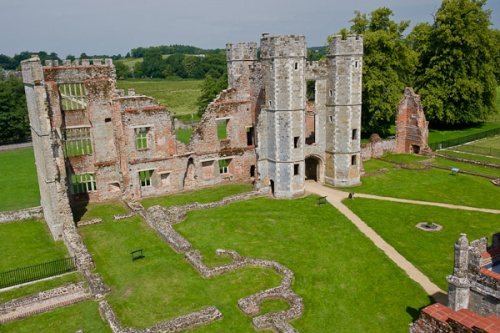 Looking down on the ruins

In 1538 Sir William's half-brother, Anthony Browne, was granted Battle Abbey. One of the monks is supposed to have cursed Browne's family 'by fire and water'. The curse did not have an immediate effect, but keep it in mind, for it will come up again in a century or two! In 1538-9 the Countess of Salisbury, Lady Margaret de Pole, was imprisoned at Cowdray.

Another royal visit took place in 1552 when the young Edward VI visited. He wasn't overly impressed with the Browne hospitality, for he complained that the food was too rich for his liking. In 1554 Sir Anthony Browne was named 1st Viscount Montague.

That did not save him from being held under house arrest at Cowdray in 1588 when his Catholic faith made Elizabeth I suspicious of his political leaning during the Spanish Armada crisis. That did not stop Elizabeth from visiting Cowdray herself in 1591.

In 1595 the 2nd Viscount Montague was responsible for producing one of the best historical records of daily life on an Elizabethan estate; his Book of Orders and Rules gives an invaluable picture of how a grand Elizabethan manor functioned. The 2nd Viscount was also imprisoned, for suspected involvement in the Gunpowder Plot of 1605.

During the Civil War much of the Cowdray estates were seized by Parliament, but the house survived. The surrounding parkland and gardens were redesigned by Capability Brown in 1770, but in 1793 disaster struck. Remember the curse?

On 24 September a terrible fire destroyed much of Cowdray House. Only a few weeks later the 8th Viscount died by drowning. The title passed through the Viscount's sister to her two sons, who both died by drowning in 1815, ending the male line. Hmm ... the curse said 'by fire and water'. Coincidence?

The Cowdray ruins crumbled away for the next few centuries, an enigmatic and romantic shell, a relic of one of the finest Elizabethan manor houses in England. Finally, in 2006 restoration work was undertaken under the auspices of the Cowdray Heritage Trust. From 2007 the remains of Cowdray House have been open to the public.

I am amazed that Cowdray is not better known as a visitor attraction. The house is astonishing; the walls stand to a quite remarkable height, like a glorious stone shell rising above the surrounding parkland. You can climb to the top of a surviving tower and look down on the house and the nearby polo field. It's an amazing view, and really gives you a sense of just how impressive this house must have been in its heyday.

You can peer down into Cowdray Walled Garden, on the same site (separate entrance fee), and see a timber-framed granary raised on staddle stones to protect it from rodents.

On the opposite bank of the river is the wooded height of St Ann's Hill, where the original Norman fortified house was built. You can take a footpath up the hill and trace the foundation outlines of the later stone fortifications. I highly recommend a visit to Cowdray!

More self catering near Cowdray House >> 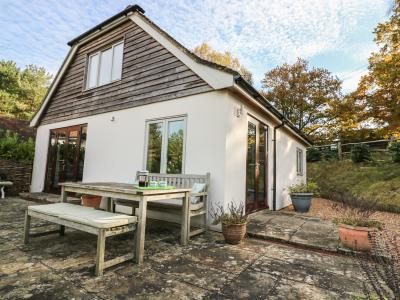 A cottage located near the town of Midhurst in West Sussex that can sleep four people in two bedrooms.
Sleeps 4