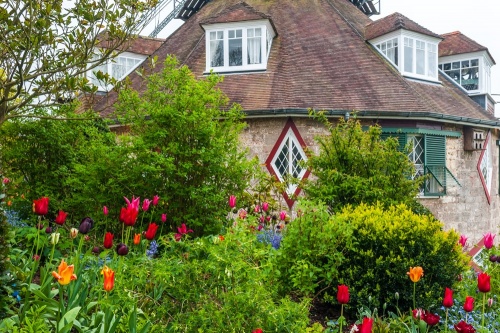 A La Ronde is an unusual 16-sided house built by two cousins, Jane and Mary Parminter, in 1796. The cousins were inspired by a grand tour of the European continent and created this striking house looking out over the Exe estuary. The interiors contain mementoes collected by the two women, and feature unusual decor, including a 'feather frieze', and a gallery lined with shells. The latter chamber is so fragile that visitors must view it on closed-circuit television.

The story of the Parminters and their travels reads like something out of an adventure romance novel. We know some details of the Parminter Grand Tour, as Jane Parminter kept a journal. The first six weeks of a transcription have survived, and give a colourful account of their journey through France. There were initially four women on the tour; Jane, her sister Elizabeth, their cousin Mary and a friend.

The four women visited Versailles and saw Louis XVI and Marie Antoinette (at a distance), and engaged in the 18th century equivalent of a whirlwind tour of Paris before travelling to the Dijon region, where they visited such diverse places as schools, churches, gardens, and hospitals.

Beyond Dijon the journals have been lost, so we can only speculate as to where the party of women went and what they saw. There are tantalising clues; including contemporary reports that in 1786 they climbed the Alpine peak of Mont Buet.

To put this into perspective, the mountain had been climbed for the first time in 1776, which makes the Parminter party the first females to climb any Alpine mountain over 3000 metres. Even today, Mont Buet is known locally as Parminter Peak, in honour of the ladies' accomplishment.

Of course, the really fascinating question is what did they see that influenced them to eventually build A La Ronde in the style they did. One candidate is the Italian palace on the island of Isola la Bella, which is known to have had a grotto decorated with shells. It seems plausible that this Italian grotto provided the inspiration for the Shell Gallery at A La Ronde.

It also seems likely that the sisters were influenced by the 6th-century mosaics at the church of San Vitale in the Italian city of Ravenna. Even reaching Ravenna would have been an extraordinary accomplishment, as in the late 18th century the roads were so bad that travellers had to take a boat from Venice.

A Venetian print at A La Ronde supports this, but it seems the sisters probably did not draw much inspiration from Rome, for most of the popular historical buildings which we now associate with the Eternal City were not yet excavated. 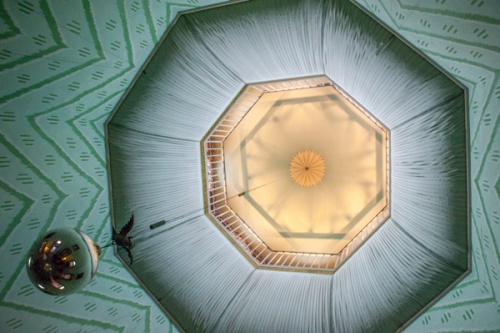 Looking up into the cupola dome

Traditionally the Parminter sisters were on their Grand Tour for a full decade, but if so, they did do the entire tour in one go, but in stages. Elizabeth, for one, was not in good health, and returned to London in 1788, when she made her will. Family tradition suggests that she died early, and Jane and Mary subsequently resumed their tour. Sometime around 1795 at least one of them had taken up residence in a house opposite Powderham Castle.

In late 1796 the cousins purchased land at Withycombe Raleigh, and construction began on the house that would become A La Ronde. The building took a full three years, and Jane and Mary moved in in 1799. They proceeded to surround the house with 20 acres of gardens and begin decorating the interior.

Tradition says that Jane Parminter designed the house herself, though this may be an embellishment, as it seems that a mysterious 'Mr Lowder' may have had a hand (possibly Commander John Lowder, a distant relative, or his son, also named John). The younger John Lowder went on to be a successful architect in Bath, where he designed a 32-sided school with classrooms in a wedge pattern.

There is no proof that this later unusual design is the work of the same architect responsible for A La Ronde, but it does seem plausible. The cousins certainly took a hand in decorating the interiors using a variety of raw materials including feathers, paper, and shells.

The cousins did not stop at the house, and began to build a combined chapel, school, and dwelling houses nearby, all under a single roof. This ambitious project, dubbed 'Point of View', was still unfinished by the time Jane died in 1811. She was buried in the chapel, aged 61 years. The school opened in 1826 and continued until 1901 when new government legislation made uncertified schools like Point of View untenable. Mary Parminter died in 1849, aged 82, and was also buried in the chapel that she had built with Jane.

The terms of her will specified that A La Ronde could only be inherited by unmarried kinswomen. This requirement lasted only until 1886 when A La Ronde passed to its only male owner, Rev Oswald Reichel. It was Reichel who altered the house to include creature amenities like an external catwalk, laundry room, and water tower, not to mention the rather useful addition of central heating and a bathroom.

Though these amenities added to Reichel's comfort, they detracted from the original design as implemented by the Parminters, so the National Trust has removed some of the most intrusive modern elements, like the large radiators Reichel installed. As a result, A La Ronde is, if not exactly as the Parminter's would have meant it to be, at least more in keeping with the spirit of the original design. 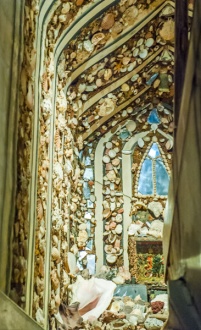 A glimpse of the
Shell Room 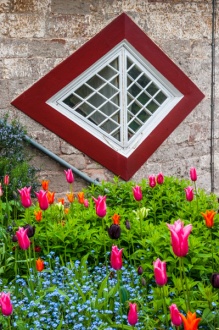 Flowers outside a
diamond-shaped window 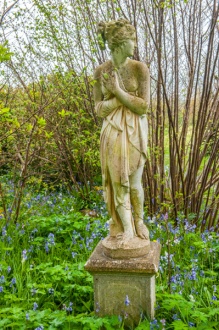 A neo-classical
statue in the gardens 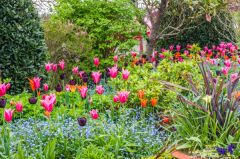 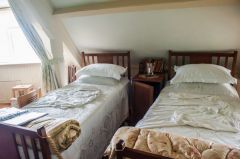 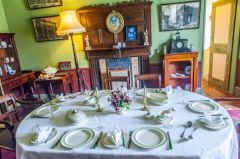 Nearest Accommodation to A La Ronde:

More self catering near A La Ronde >>

More Hotels near A La Ronde >>

More bed and breakfasts near A La Ronde >> 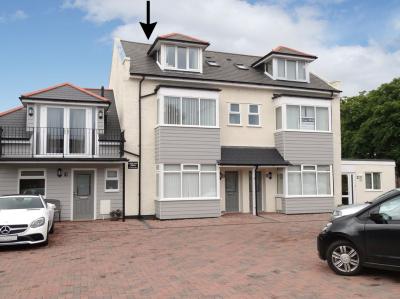 This smart townhouse is situated in the Devon seaside town of Exmouth and can sleep six people in three bedrooms.
Sleeps 6 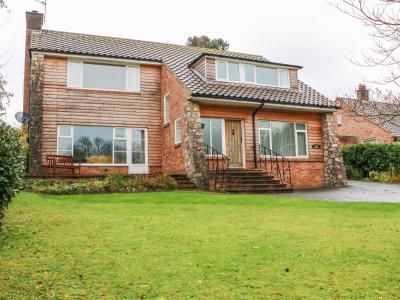 This superb cottage rests in Exmouth, Devon and can sleep seven people in four bedrooms.
Sleeps 7