HERITAGE HIGHLIGHTS:   There has been a mill here since at least the 13th century 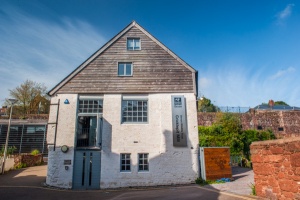 Cricklepit Mill stands like an oasis amid the bustle of modern Exeter, a short distance from the historic quay. The unusual name probably comes from 'crickenpette', meaning a hollow, or pit beneath cliffs. The mill stands on Exe island, which was created when a pair of water channels, or leats, were dug some time in the late Saxon period to drain the surrounding marshes.

The first mill here was built around 1220 when Nicholas Gervase obtained the site. Gervase is known for building the first stone bridge over the River Exe. You can still see a section of the old bridge a few hundred yards north of the mill.

In 1529 the mill was rebuilt, and by 1689 the gearing mechanism was altered so that one of the waterwheels drove two millstones, one devoted to grinding malt.

By the middle of the 18th century, the mill was adapted into a fulling mill, using water power to pound woollen cloth to a fine finish.

During the 18th century, Cricklepit was a busy place, using 3 waterwheels to provide power to 5 sets of milling machinery used for grinding and fulling. Beside the mill is the old drying house, where woollen cloth was hung on tenterhooks to dry after being pounded in the mill.

The demand for wool cloth went into decline during the Napoleonic Wars, and the waterwheels were used to power other mechanical processes. In the 19th century, the mill also powered a manganese mill and a machine to grind rubble.

A document from 1859 shows that a miller from Cricklepit named Richard Kelland was brought to trial on a charge of diluting his flour with alum powder, but the charge was not proven. By the late 19th century the mill was only used for grinding grain to produce animal feed, though it briefly saw service in the early 20th century as a sawmill. 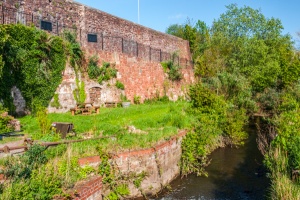 The mill gardens and leat

The mill went out of operation in 1957, and the building was used as a grain store, then as a furniture shop for several decades before falling derelict. After a fire damaged the building in 1999, the Devon Wildlife Trust stepped in and restored the historic mill mechanism. The Trust now has its headquarters in the mill building and uses it as a wildlife interpretation centre.

The mill is kept in full working order and you can see the milling process in operation and buy fresh-ground flour. Just east of the mill building stands the Outer Waterwheel, built in 1895 by the Taylor & Bodley engineering company whose premises were in nearby Bonhay Road.

The huge iron wheel weighs six tonnes and had to be brought to the mill site in two large sections and reassembled on site.

If you look back towards the mill from the Outer Waterwheel you can see a large opening in the side of the building and, just visible, the internal waterwheel, built by the Exeter firm of Bodley Brothers and installed in the middle of the 19th century.

The mill grounds are home to an extraordinary 150 species of plants. Common species include tansies, valerian, poppies, and primroses. The Trust installed a sedum roof which encourages plant and insect life. The leat stream hosts freshwater shrimp, and kingfishers are regular visitors, along with dippers and egrets.

Otters are often sighted, as are herons and sparrowhawks. A hide made of willow has been set up so visitors can watch for otters and birds from a sheltered position by the nearby bridge. The wildflower meadow beside the mill is lush with butterflies and bees in summer. On the south side of the Higher Leat stream is a medieval-style labyrinth made from carefully planted rye grass.

In 2010 a hydro-turbine was installed to harness the power of water passing through the mil and provide electrical power, which powers the Wildlife Trust offices, including all lights, computers, and electrical equipment. any extra power is fed back into the national grid. It is fascinating to compare the modern water turbine, which runs at about 80% efficiency, with the traditional wooden undershot waterwheels used here, which ran at only 30% efficiency.

Admission to Cricklepit Mill is free. It is usually open during normal weekday office hours, and occasionally on weekends. There is no parking at the mill itself, but there are paid parking areas within a few minutes walk, the nearest being Lower Coombe Street, off Quay Hill. 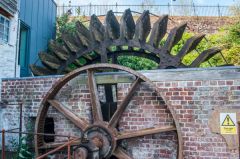 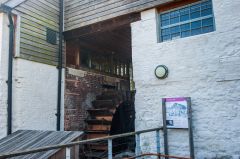 More self catering near Cricklepit Mill