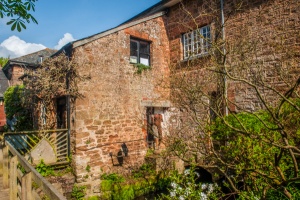 Otterton began to grow as a settlement in the Saxon period, with the River otter providing transport links to the sea. The river provided more than a transportation link, however; it offered a perfect site for water mills. By the 11th century Otterton was the only village in Devon to boast 3 corn mills.

William the Conqueror granted the Otterton estate to the monks of Mont St Michel in Normandy, and it became their most important English possession. Over the next few centuries, the Otterton corn mill continued to grind grain, but by 414 the emphasis shifted to fulling; the process of processing wool by beating it to thicken the finished cloth. Two fulling mills operated on the main mill leat, processing wool for the woollen mills in Ottery St Mary. A third mill was built across the stream, using water to power a forge.

The mill continued to grind grain, but its expansion was curtailed by silting of the River Otter's estuary in the 15th century. The Dissolution of the Monasteries spelled the end for monastic involvement on Otterton and its mills. The monastic estate was sold to Richard Duke, a clerk in Henry VIII's Court of Augmentation. 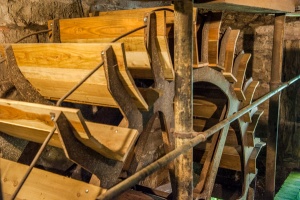 In the late 18th century a new Mill House was built opposite the mill site. The mill landlord was Lord Rolle, who was very specific in his rules for the miller, who had to grind his lordship's grain at a set rate (6d per bushel) and refrain from milling on Sundays.

Millers must have occasionally indulged in a little poaching to put food on their tables, for Lord Rolle added a specific clause to the rental agreement fining the miller $20 if he was caught poaching salmon in the river.

A 19th-century miller named John Uglow became a force for law and order. He installed village constables and armed them to catch poachers and smugglers. The villagers relied on smuggling and poaching to augment their meagre livelihood and were furious at the introduction of constables. They took revenge by climbing Uglow's garden walls and cutting down his fruit trees.

Uglow bult a thriving business, shipping flour as far away as Plymouth. He installed a pair of French millstones, each inscribed with a rhyming dedication. The first reads,

You can see both stones in the mill. 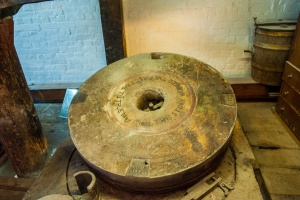 The fortunes of the mill declined after Uglow's time. By the 1930s the business had shrunk to such an extent that deliveries could all be handled by a pony and cart, bringing flour to nearby villages. The main focus was on local wheat and barley meal. In the last few decades of its life the mill ground barley for animal feed. By the late 1950s even that milling had ceased and the mill was abandoned as being uneconomical to maintain.

From 1977 the decaying mill buildings were carefully restored. The mill now grinds wholemeal flour, which you can buy in the shop. There is a very popular bakery, using fresh flour from the mill. The historic mill buildings incorporate a gallery, craft shop, and artists' workshops.

There are 2 wheels, each 3 metres in diameter. They were constructed by the Exeter firm of Bodley Brothers in the early 19th century. Each wheel can turn a pair of mill stones simultaneously, with each stone measuring 1.2m across.

The wheels are different; the left wheel has angled buckets of wood and n oak shaft, while the right wheel has an unusual system of curved iron buckets and a metal shaft. The water wheel shafts drive cogged wheels of iron and wood. A tentering gear adjusts the fineness of the flour by raising or lowering the top millstone.

The mill takes up three floors. Grain is hoisted to the top floor where it is stored in bins. It is then fed through chutes to the millstones on the first floor and from there into sacks on the ground floor. The mill can produce up to 250kg of flour per hour; that's 25kg in 6 minutes.

Our family loved visiting the mill, and we can personally attest to just how tasty the fresh-baked goodies in the shop are! Immediately beside the mill is a historic bridge across the River Otter, built in 1840 on the foundations of a medieval bridge dating to at least 1430.

The mill is usually open daily and is free to enter. There are special milling days each month; see the official website for current dates. Groups can also sign up for in-depth tours of the mill. 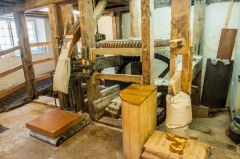 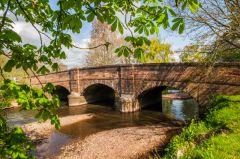 More self catering near Otterton Mill

Self Catering near Otterton