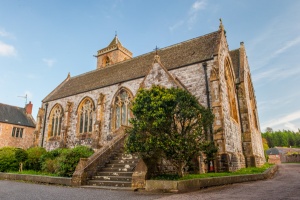 The Otter valley area was settled in the 8th century by Saxon newcomers. They built a church on a hill overlooking the harbour, and the settlement prospered and became a busy seaport and transportation hub. At the time of the Norman Conquest Otterton was owned by Countess Gytha, mother of King Harold. When Gytha rebelled against William the Conqueror her lands were seized by the new king. William granted the royal estates to the Abbey of Mont St Michel in France.

The Abbey had extensive trade interests in Otterton, and installed a Bailiff to look after abbey affairs. Then in the mid-12th century a Prior and 4 monks were sent to take charge of the abbey's interests.

Monastic buildings were erected on the north side of the Saxon church. Part of the 12th-century monastic buildings remains, and now serve as almshouses offering a residence for the elderly. The monks rebuilt the Saxon church, by then some 400 years old, adding a tower, linked to a new nave for the villagers. So in effect, there were two churches, one for the monks and one for the villagers, with a tower in the middle. 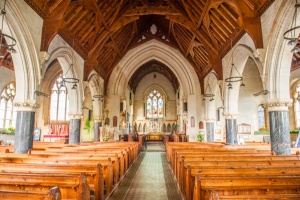 Looking down the church nave

Ongoing wars with France led to punitive measures against the monastery throughout the next 200 years, and priors were occasionally expelled. Then in 1414 Henry V seized the manor of Otterton and granted it to his own foundation of Sion Abbey. The abbey retained ownership of Otterton Priory until the Dissolution of the Monasteries. The monks were dispersed, and the monastic half of the church pulled down, or simply allowed to decay.

Richard Duke, a clerk in the Court of Augmentations (the body that looked after monastic properties seized by the crown) saw his chance and bought Otterton Manor in 1539. He converted part of the monastic buildings to a new manor house, parts of which still stand near the church.

Duke served as Sheriff of Devon, and died in 1572. His nephew, also named Richard, inherited the manor. He and his wife Katherine are commemorated by a memorial brass on the west wall of the church.

Another brass commemorates Robert and Sarah Duke and shows the couple between kneeling figures of their 8 children.

By the middle of the 19th century the medieval church was in dire condition. The Rt. Hon. Louisa Lady Rolle paid for the entire church to be pulled down and a new church built in its place. The new church was consecrated in 1871.

The Duke family vaults were emptied and the bones of generations of the family reburied in a trench in the churchyard. Brass plates from the Duke coffins are now displayed at the west end of the church. In the churchyard is an altar tomb to James Courtenay (d. 1593) which stood in the transept chapel of the old church. 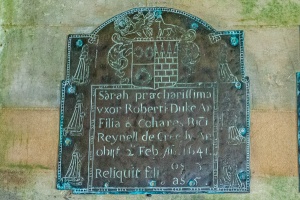 One of the highlights of the church interior is a side altar given by Lady Clinton. It was dedicated by the Bishop of Exeter in 1921 and incorporates hangings used for the Coronation of George V in Westminster Abbey. Another highlight is a 1762 parish chest.

Look for an intriguing memorial to a pair of vicars named Venn. William Venn served as vicar from 1600-1621, and Richard Venn was installed as vicar in 1625. He was ejected from the living in 1645 for his Royalist sympathies. The inscription eloquently tells the tale of his tribulations,

"During 14 years of almost constant wandering he suffered many hardships and even imprisonment in Exeter Gaol. In 1660 he was restored to his Parish and died and was buried here June 28 1662".

The plaque to the Venns was installed by their descendent, John Venn, Senior Fellow and President of Gonville and Caius College Cambridge in 1905.

Though many of the furnishings are 19th and early 20th century, St Michael's retains a sense of history. Reminders of the monastic origins of the church are everywhere, and it pays to inspect the nearby buildings for signs of medieval origins. 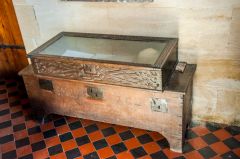 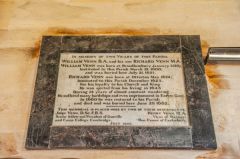 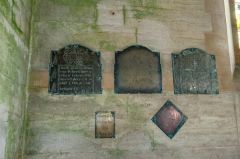 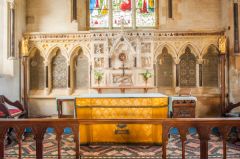 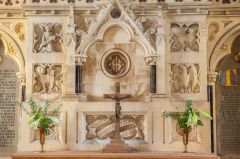 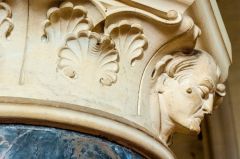 Self Catering near Otterton