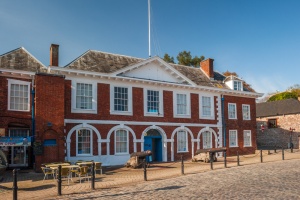 The first quay at the mouth of the River Exe was built by the Romans and during the medieval period, the Quayside evolved to become one of the busiest trading centres on the south coast.

It was not easy for Exeter traders, though, because rival merchants built weirs across the river to prevent goods reaching the Quay. The biggest change came in 1564 when John Trew began the Exeter Canal, enabling vessels to offload cargo much closer to the city walls.

In the 18th century Exeter was one of the busiest ports in England, its commerce fuelled by the wealth of its woollen cloth industry. The flow of trade through Exeter's busy quay meant that some form of control was needed to regulate - and tax - the goods before they entered the city. The answer was the Custom House, built in 1680 beside Watergate.

It is the oldest purpose-built custom house in England, and the original 17th-century office fittings make it a building of national historic importance. The combination of early use of brick, Renaissance facade, and superb plasterwork make it one of Devon's finest historic buildings.

The new Custom House was designed by Richard Allen, a builder from north Devon. On the ground floor are 5 large rounded arches. The central arch acts as the main entrance. The other 4 arches are now filled in, with large sash windows set into brick, but the arches were originally designed to be open so that goods could be safely stored out of the rain.

Behind the storage area was the King's Stove, where smuggled goods could be burned. You can still see a fireplace with a cast iron door and a flue, but it isn't clear if this is a remnant of the original King's Stove. 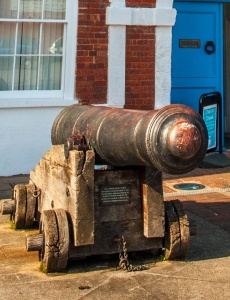 One of the 'Waterloo' cannons

The interior highlight of Custom House is a series of 3 plasterwork ceilings, designed by John Abbot of Frithelstock. Abbot was paid £35 for his work, a considerable amount for the time, but it was money well spent, for the result is one of the finest plaster ceilings in England. The largest ceiling adorns the main hall (the Long Room) on the first floor, where you can see a central garland decorated with fruit, flowers, and a striking collection of serpents. Look for the Royal Arms of Queen Anne above a row of 19th century cabinets.

One of the best interior features is the open-well staircase, decorated with beautifully carved balusters and wooden panels. One of the offices in the rear of the first floor retains its original 17th-century cupboards - an unusual survival.

At right angles to the Custom House is a late 17th-century warehouse, in similar style.

In front of the Custom House are a pair of cannon. These are traditionally said to have been used at the Battle of Waterloo in 1815, but the truth is a little less dramatic but quite a bit more complicated. They were in fact, part of a set sold to Russia to serve aboard Russian warships. After Napoleon's defeat at Waterloo, they were given back, and four were marked for use on the Wellington memorial on the Blackdown Hills in Somerset.

When the committee setting up the memorial realised they had not, in fact, been used at Waterloo they refused to accept them. Exeter City Council used four cannons as bollards at the Quay and buried the rest.

A century later the buried cannons were excavated, and 4 were indeed mounted at the memorial. The remainder, saving the ones at Exeter Quayside, were melted to make munitions in WWII. Two of the Exeter cannons were finally mounted in front of Custom House where you can see them today.

The Custom House has been transformed into a modern visitor centre, offering full tourism services including accommodation booking and local information. See an exhibit on the historic Quayside and explore 2,000 years of Exeter's history from Roman times to the present. Displays show how the wollen cloth trade evolved, with models and historic artefacts such as tenter hooks for stretching wet cloth on frames to dry.

Regular themed walking tours depart from in front of the Custom House. A few steps away is Quay House, where goods were unloaded and stored. 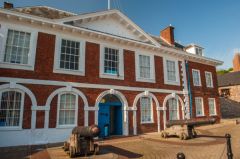 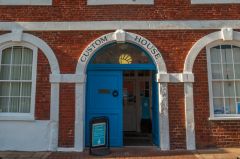 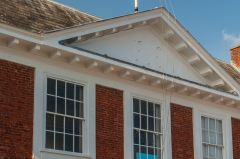 More self catering near Custom House