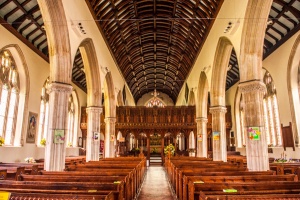 Looking east down the nave
of Kenton All Saints

According to tradition, around the year AD 560 St Petroc founded a simple church at Kenton, a small village between the estuary of the River Exe and the Haldon Hills. The present church was built between 1360-1370 in Perpendicular style, and though it has been restored several times since it still retains its 14th-century character.

As you enter the beautifully carved south porch look to your left and you will see a medieval holy water stoup. Near it are a series of deep grooves in the stone, caused by archers sharpening their arrows before practice. Over the outer doorway is a beautifully decorated statue niche and to either side of the doorway are corbels said to depict Henry IV and Joan of Navarre.

The glory of All Saints is its ornately carved 15th-century screen. Over the centre of the screen is a figure of St Michael trampling the devil, with two angels in attendance. On the base of the screen are 40 panels painted with likenesses of saints and Biblical prophets. Surrounding the screen doorway are carved figures of the 12 apostles.

Above the screen is the Lumley Memorial Cross, given in memory of Mrs Mary Lumley. The cross stood for many years at the altar of Exeter Cathedral. It was stolen from the cathedral in 1950, only to be found the next day. It was installed in Kenton church in 1964.

On the south wall is an old Spanish chest used for many years to store vestments. On the wall is a memorial plaque to the 15th and 16th Earls of Devon and their sister, all of whom tragically died within a few months of each other in 1935.

On the north wall of the chancel are plaques to Rev Harry Drew and his wife, the daughter of Prime Minister William Gladstone.

The Lady Chapel was for many years the private chapel for the owners of Oxton Manor House. Generations of Martyns, Swetes, Studds and Neales had a family pew in the chapel. Memorials to members of all 4 families can be found inside and outside the chapel. The oldest memorial in the church is to Sir Nicholas Martyn and his sister-in-law Dulcebella Hodges (d 1628). 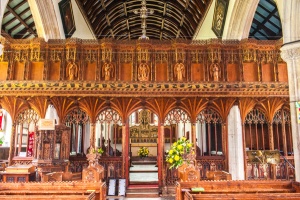 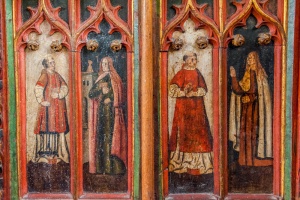 Painted panels on the screen base 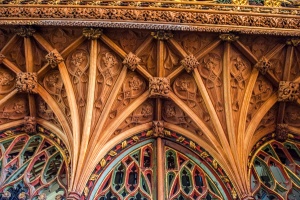 The most moving memorial in the church is to Elizabeth Atwill, who died in childbirth in 1673.

Look for a medieval piscina on the chapel wall. This was hidden beneath panelling for over 300 years and only discovered by accident.

If you look down the nave you can see that the arcade pillars are not straight. A local story related in the church guide says that the pillars were perpendicular until a new roof was installed in 1865. The extra weight of the roof caused subsidence, and the pillars began to skew at an alarming angle. Not surprisingly, this caused consternation amongst the parishioners, and the local Methodist chapel found their numbers suddenly swelled by worshippers escaping the peril of All Saint's roof.

The nave pillars are carved with unique designs. The capital nearest the pulpit is carved with grotesque faces. The pulpit itself is a careful reconstruction of the 15th-century original, which was placed in a cupboard by restorers in 1851. The pulpit was reassembled by Rev S Baring Gould from drawings made during the church restoration. The original pulpit was apparently carved from a single, huge oak tree.

The opulent reredos is by CE Kempe, more famous for his stained glass designs. The octagonal font was installed in 1844 to replace a medieval font which has since disappeared. 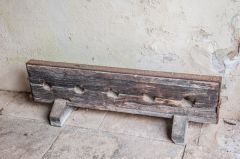 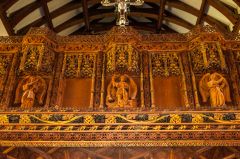 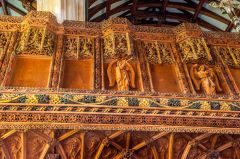 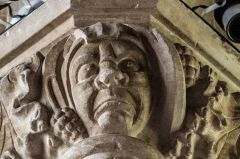 Nearest Accommodation to Kenton, All Saints:

More self catering near Kenton, All Saints

More Hotels near Kenton, All Saints

More bed and breakfasts near Kenton, All Saints