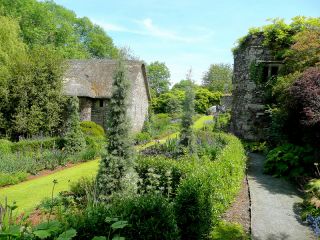 Garden House
The Sunday Express posed the question: "Is this the best garden in Britain?" and while you are sure to have your own opinion on that one, you are also sure to appreciate the naturalistic plantings of the eight-acre garden of The Garden House, where a 16th-century vicarage tower stands in a terraced walled garden, and the seasons variously offer crocuses, maples, and rhododendrons.

Today, all that is left of this original building is the tower and the kitchen, now a picturesque thatched barn. These remains are on the lower terrace of the walled garden and add a touch of romantic fantasy to the gardens.

A new vicarage was built in the early 19th century, and this now acts as the conference centre and tearoom.

The garden was begun after WWII when Lionel and Katherine Fortescue purchased the property and set about an ambitious programme of restoration and expansion of the gardens. Over the course of 25 years the gardens were extended to create not one garden, but a series of linked gardens, inspired by nature.

Among the garden areas to enjoy are a summer garden, wildflower meadow, Acer glade, quarry garden, walled garden, camellia walk, and a cottage garden, to name just a few. Explore Garden House and see if you can answer for yourself the question, 'is this the best garden in Britain?'

More self catering near Garden House >>