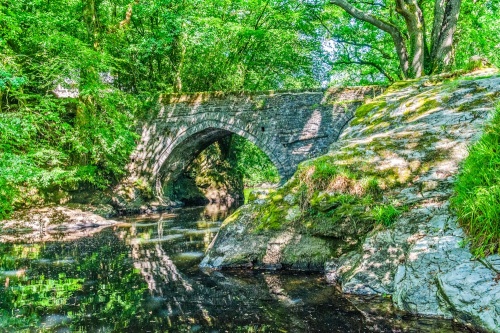 Denham Bridge and the River Tavy

Denham Bridge is a scenic 17th-century bridge across the River Tavy near the village of Buckland Monachorum. There has almost certainly been a bridge here since the medieval period, if not longer, but the present bridge dates to the 1600s, with Victorian restoration.

The bridge consists of two arches; one over the main water course and the other over a dry channel on the east bank. The eastern arch is much flatter than the main arch over the river, which rises to a point. Construction is of local rubble stone. Each arch is made with a double row of stones. On top is a roughly-built parapet, rebuilt in the Victorian period. 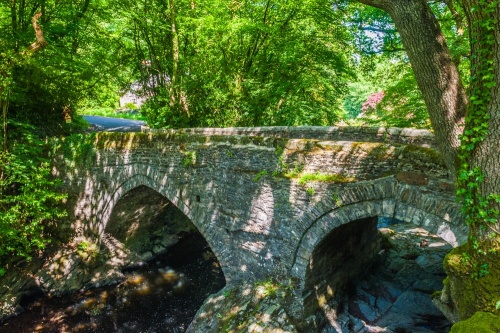 A closer look at the twin arches

It is also described in some online articles as a packhorse bridge; if true, it is the most elaborate packhorse bridge you will eve see, as it is wide enough and strong enough to take modern traffic.

Denham Bridge has been attracting artists and photographers for hundreds of years. Among them was the painter JMW Turner, who sketched the bridge in 1813 as part of a long visit exploring picturesque sites in Devon. His sketches are held at the Tate Britain museum in London.

In recent years Denham Bridge has been a popular location for wild swimming and bridge-jumping. Thrill-seekers come to the bridge to jump off the centre of the bridge into the pool below. The pool is thought to be 47' deep, which ought to present no problems, but local residents point out that when the river is in spate after heavy rains a lot of debris washes under the bridge, bringing the danger of unfortunate accidents into play. 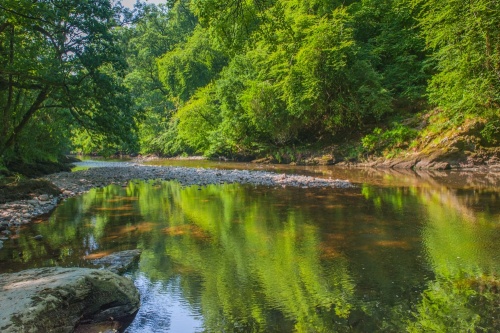 The River Tavy from Denham Bridge

Denham Bridge is located on the minor road between Buckland Monachorum and Bere Alston. We managed to find a spot to pull off onto the verge near the bridge, but if that proves to be a problem just follow the road over the bridge to the west bank of the River Tavy and take the turning on the left for the Forestry Commission car park at Denham Wood.

There is a parking area there and footpaths lead back along the river to the bridge. Denham Wood forms part of the National Trust's Great North Wood property. There are waymarked paths through very pleasant woodland and along the river bank on both sides.

A very short distance to the east is the National Trust's Buckland Abbey, the former home of the Elizabethan naval hero, Sir Francis Drake.

More self catering near Denham Bridge