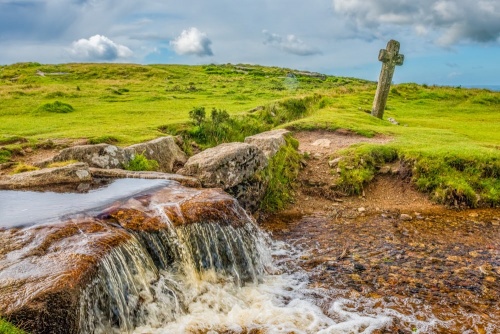 The aptly-named Windy Post Cross is a late-medieval moorland cross beside the Grimstone and Sortridge Leat, possibly erected in the 16th century to replace an earlier cross on the same site.

The granite cross marked the moorland route from Merrivale Bridge to Moortown and on to Tavistock. It stands at a meeting place of several old trails across the moor, and at a point where the leat splits in two to direct water to nearby dwellings. 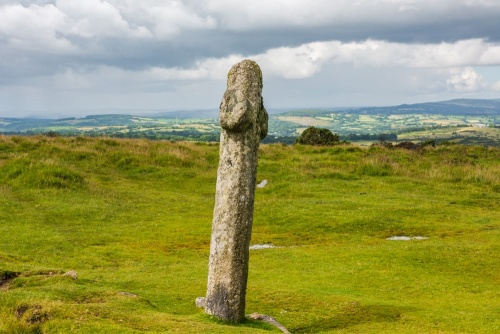 Sometimes known as the Beckamoor Cross, this late-medieval granite cross is very well preserved. It stands at the lowest crossing point between the watersheds of the rivers Tavy and Walkham. It has been carved from a single slab of coarse granite and stands with a pronounced lean to the west. The cross arms are aligned on an east/west axis.

The cross is 2m high and 70cm across, with chamfered sides. A 19th-century OS bench mark has been set into the south face of the cross shaft, though this is very worn and difficult to make out.

Over 100 wayside crosses survive on Dartmoor, where they were frequently used to mark the course of major pathways across the open moors. These wayside crosses cover the period from around AD 900-1500. Their design changed very little over this timespan, so they can be very difficult to date accurately. 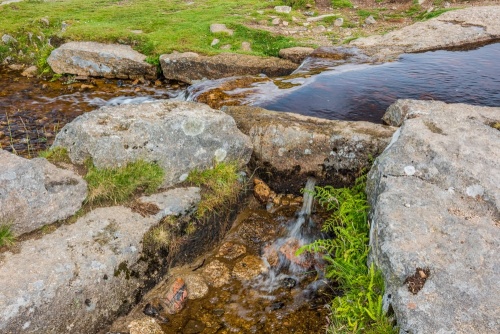 A few steps from the cross is the Bullseye Stone. This vertical stone slab has been bored with a circular hole in its centre and placed across the leat to allow a measured amount of water through. This was common practice on Dartmoor to supply a set amount of water to farms. 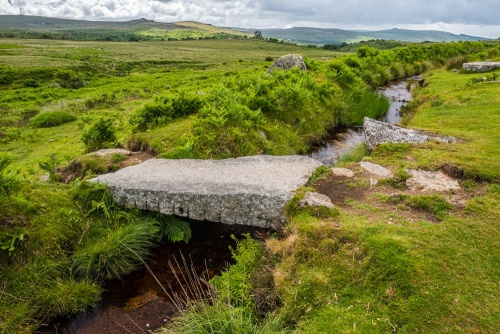 A clapper bridge across the leat

The most typical route to Windy Post Cross starts from a small car park at grid reference SX534751 on the B3357 road between Tavistock and Two Bridges, just east of Merrivale village. As you drive from Tavistock, the road rises to the open moorland, marked as a panoramic viewpoint on OS maps. Just past the summit, there is a parking area to the right of the road, and, a hundred yards further on, a smaller parking area to the left (north).

Park at this second car park, cross the road to the south side, and walk along the west side of the obvious gully. Don't take the path down the east side of the gully, as we did! The path at this point is indistinct, but don't worry, just keep the gully and leat to your left and follow it around the base of Barn Hill, following the contour of the land.

You will pass a clapper bridge and discarded grindstone beside the leat. 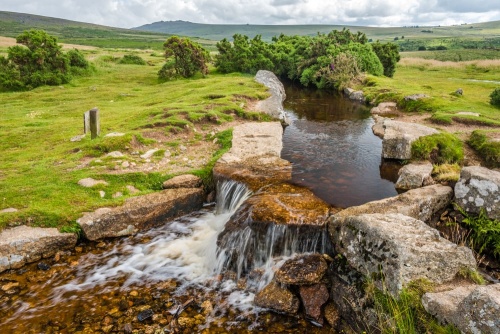 The leat divides into two branches at the cross

Carry on for 700m and you will see Windy Post Cross on the far side of the leat, reached by a wide clapper bridge.

From the parking area to the cross is no more than 20 minutes, and the going is quite easy, though it can be muddy in several places.

This is one of the most atmospheric moorland crosses on Dartmoor, and makes for a very enjoyable short walk.

About Windy Post Cross and Bullseye Stone
Address: Barn Hill, Whitchurch Common, Merrivale, Dartmoor, Devon, England
Attraction Type: Prehistoric Site - Wayside Cross
Location: From a parking area at SX534751 on the Tavistock to Two Bridges road (the B3357), follow the leat south, keeping to the western side of the gully. You will come to the cross after 700m.
Location map
OS: SX534743
Photo Credit: David Ross and Britain Express

More self catering near Windy Post Cross and Bullseye Stone