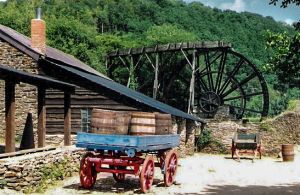 Morwellham Quay
A historic copper port has been restored as an outdoor museum of industrial heritage. See a miner's cottage, waterwheel, assay laboratory, smithy, cooperage, lime kilns and other buildings that create a fascinating experience of the history of the area.

The quay at Morwhellam was established in the 10th century by the monks of Tavistock Abbey. The monks needed a good way to carry goods on the River Tamar since the River Tavy was not navigable very far inland. By the early medieval period, the port had begun to serve the burgeoning mining industry. Initially, the port acted as a transportation hub for tin mines in the area, but by the 13th-century silver and lead was also being moved from Morwhellam.

Then in the 18th-century copper was discovered near Morwhellam itself, so of course, the Quay was a convenient means of getting the copper ore to market.

Goods were initially carried by packhorse to the quay, but the growing traffic meant that a more convenient solution was needed. The result was a 4.5 mile long Tavistock Canal, which opened in 1817.

One of the striking features of the canal is a tunnel stretching 1.5 miles through the hillside above the Quay. The tunnel emerges over 200 feet above the quayside, so a clever inclined plane was built, using a water wheel to bring barges to the quay.

In 1844 huge deposits of copper was found just 4 miles north of Morwhellam. Investors who paid 1 pound for a share in the mining venture found their investments were worth 800 pounds! Morwhellam was briefly known as the wealthiest copper port in the British Empire. A new quay had to be built to take the extra 30,000 tons of copper ore, and a second inclined plane was added.

But the heyday of Morwhellam was all too short. The advent of cheaper and more efficient railway transportation spelled the end of the Tavistock Canal as a major transport route. The canal was used to supply water to a hydroelectric plant and the buildings at the Quay were allowed to decay.

The site was purchased by the Bicton Park company and turned into a heritage site to reflect the long history of the site and the industry and trades that flourished here. The buildings at the quayside have been restored to show how Morwhellam might have looked in the Victorian period, with the original assayers' office and a variety of 19th-century dwellings and craftsmen's workshops.

See Victorian cottages, a farm, and schoolhouse, as well as the original industrial machinery. One piece of machinery is the ore-crushing plants, powered by a 32-foot overshot waterwheel. An electric tramway takes visitors on a tour inside the copper mine, and you can see several examples of historic lime kilns.

Morwhellam Quay offers a unique insight into a fascinating period of Devon's history. It will definitely appeal to families and anyone with an interest in industrial heritage.

More self catering near Morwellham Quay >>