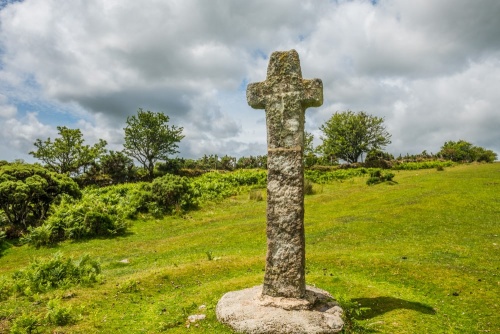 Cadover Cross (sometimes known as Wigford Down Cross or Cadover Bridge Cross) is a medieval wayside cross thought to have been erected by the monks of Plympton Priory to mark their route to Tavistock. The cross stands on the exposed slope of Wigford Down and overlooks Cadover Bridge. 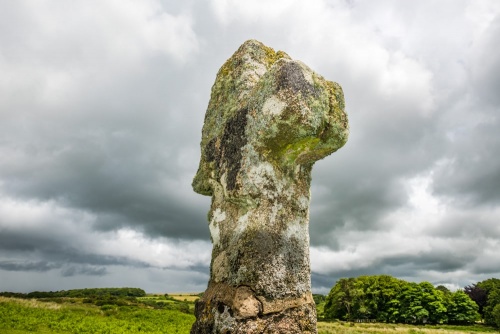 The cross was discovered lying broken into fragments by soldiers on manoeuvres in 1873. The vicar of nearby Shaugh Prior parish asked the soldiers to re-erect the cross. This they did, setting it at the centre of a grassy mound surrounded by a ditch. You can still see traces of the mound and ditch.

The cross had fallen again by 1901, possibly after being used as a rubbing post by livestock. While preparing to set it upright once more, the original medieval socket stone was unearthed in 1915. Once again the cross fell, and it had to be re-erected yet again in 1936.

All of the cross's adventures mean that today only the top third of the cross and the base are original. 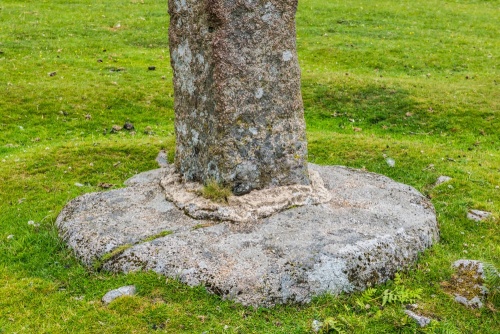 Plympton Priory was an Anglo-Saxon minster church (the mother church for a region). The priory was re-founded as an Augustinian priory in 1121 under the leadership of Bishop Warelwast of Exeter. Warelwast was said to have been alarmed at the loose morals of the canons of Plympton, so he sent them to Bosham and brought in new canons from Merton and Aldgate priories.

Plympton Priory grew to be the most prosperous monastery in Devon and one of the wealthiest in all of England before it was dissolved by Henry VIII in 1539.

At the time when the cross was erected, there was no bridge across the River Plym, so the river had to be crossed by a ford. 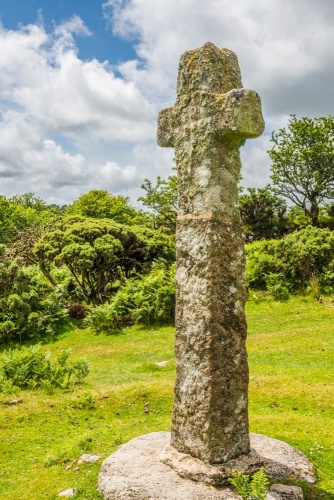 The cross from the east

There can be few Dartmoor crosses easier to reach than Cadover Cross. It stands in an open field, easily visible from the large parking area on the south side of the River Plym, directly beside Cadovewr Bridge. To reach the cross, simply walk across the bridge to the north bank and take the signposted track that leads north and west across the slope of the hill. The cross is visible throughout the stroll.

Alternatively, there is a small, roughly-surfaced car park on the north bank of the river, further up the hill from the cross.

More self catering near Cadover Cross