Cotehele, Chapel in the Woods 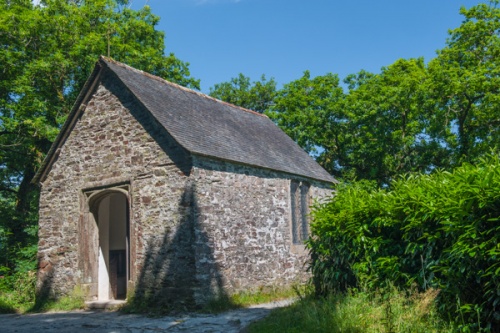 Chapel in the Woods, Cotehele

Cotehele House is one of Cornwall's great treasures. The stately home near Calstock has been the home of the Edgecumbe family since the 15th century. Most of the multitudes who flock to see the house each year are unaware of a small historic chapel tucked away in the grounds.

The 'Chapel in the Woods', or, more properly, the Chapel of SS George and Thomas Becket, was erected by Sir Richard Edgecumbe, the builder of Cotehele House.

The story behind these bald facts is as exciting as any modern thriller. In 1483 Sir Richard joined a rebellion against King Richard III. The rebellion was quashed, and the king's men under Sir Henry Trenowth of Bodrugan pursued Edgecumbe through the woods.

He must have thought the end was near, but, thinking quickly, Sir Richard threw his hat upon the waters of the river that runs through the woods, and hid in the trees. His enemies saw the floating hat and assumed that Sir Richard had been drowned while trying to cross the water. They left, and Sir Richard was able to complete his escape and make his way to safety in Brittany.

A few years later, Henry Tudor defeated Richard III at the Battle of Bosworth and took the throne as Henry VII. Sir Richard was able to return from exile and reclaim his estate at Cotehele.

Sir Richard wanted to give thanks for his escape so, sometime between 1485 and 1490 he built this small single-cell chapel at the spot where he had cast his hat into the river. The chapel measures only 6.3m by 4.6m and is built of coursed slate and stone rubble.

The interior of the chapel is extremely simple, with a few wooden benches arranged along the whitewashed walls, a simple wooden altar table, and a few fragments of medieval stonework. A few of the bench ends are original 15th-century work. Above the doorway is a wooden panel placed here during a restoration in 1769, recounting the tale of Sir Richard's escape and the founding of the chapel. 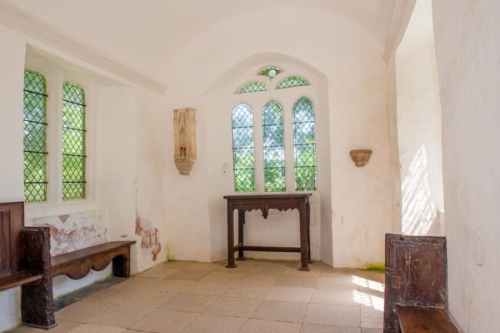 This delightful medieval building will never make it into a list of Egland's thousand finest churches; it is a very plain, extremely simple stone chapel, and its all the more moving for it's simplicity. The interior is almost completely unadorned save for a statue niche beside the simple wooden altar table.

A pair of wooden benches sit against opposite walls, and these have very nicely carved end panels. Over the door is the painted wooden plaque telling the tale of the chapel's exciting foundation. And that's it, there is nothing more to see.

Though it is not far from Cotehele Quay, the site is serenely quiet and peaceful, and you can imagine yourself a thousand miles from anywhere. I loved it! Though part of the Cotehele estate, you can access the chapel without visiting the National Trust house or mill.

Simply follow the signs to Cotehele Quay parking area and from there take the wooded path up the hill towards the house. You will come to the chapel after a five-minute walk - some of it rather steep. 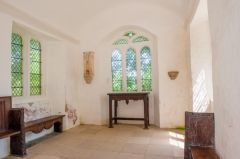 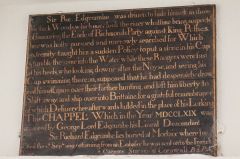 Nearest Accommodation to Cotehele, Chapel in the Woods:

More self catering near Cotehele, Chapel in the Woods >>

More Hotels near Cotehele, Chapel in the Woods >>

More bed and breakfasts near Cotehele, Chapel in the Woods >>