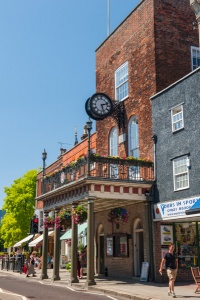 A landmark in the historic core of Maldon, the Moot Hall was built as a private residence in the early 15th century - probably between 1420-1436. The builder was Robert D'Arcy, lord of Maldon and one of the most powerful men in the east of Essex. In 1422 D'Arcy married a wealthy heiress named Alice Fitz Langley, and decided that he needed a new dwelling to emphasise his power and importance in the area.

At that time all the other major buildings on Maldon's High Street were built of timber, so D'Arcy decided to build his new dwelling of red brick. Though it is now ubiquitous, in the early 15th-century brick was a prestige material, and only those who were wealthy could afford to build in brick. so D'arcy's new house was not just an impressive new structure, it was a statement. 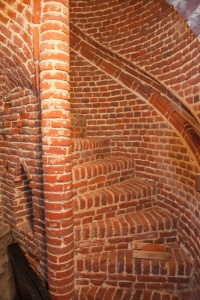 We do not know what the original building was intended to look like, and it is possible that it was never finished. In 1508 D'Arcy's son, Roger died, and work ceased. In 1536 the rear part of the house was pulled down, and in 1539 it was sold to a civic Bailiff named John Church. Church died in 1554, and by 1560 the Moot Hall tower was falling apart. In 1594 it was being referred to as the 'remains of a once fair house'.

But rescue was at hand. In 1576 the property was purchased for £55 by the Corporation of the Borough of Maldon to replace an old timber moot hall close by.

The new Moot Hall served several roles; it was a meeting place, a safe place to store civic records, a courthouse for Quarter Sessions, and a prison. Offenders were kept in a small Bailiff's gaol on the ground floor.

The Moot Hall continued to serve a judicial role into the Victorian period, and by 1863 it was a police station with a prison cell and a small exercise yard in the back. But during the 20th century, various groups using the Hall moved out, one by one.

The police left for a purpose-built station house in 1912, the Magistrates Court moved in 1950, and after the civic government was reorganised in 1974 the Moot Hall ceased to play a regular part in town administration. It is now a museum of local history, and a venue for hire for ceremonies such as civil weddings. 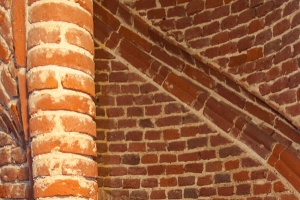 On the ground floor are a large common room, Mayor's Parlour, the original police station, underground brick-vaulted gaol cell, and the exercise yard for prisoners. On the first floor is a recreated 19th-century courtroom. The second floor houses the Council Chambers and display of local history. Visitors can ascend to the roof for panoramic views over Maldon and the Blackwater estuary.

In the eastern corner of the building is a set of brick stairs connecting the three floors. This unique newel staircase is one of the earliest uses of bricks for stairs in England and is quite an amazing piece of architecture. A comparable stair of roughly similar date can be found at Kirby Muxloe Castle in Leicestershire.

The Moot Hall is open regularly for guided tours, especially on Saturdays (see the official website or the notice board outside the Hall). When we visited we met an extremely friendly guide who was full of enthusiasm for the history of the building, and the town itself. Her knowledge and friendliness really made our visit enjoyable. 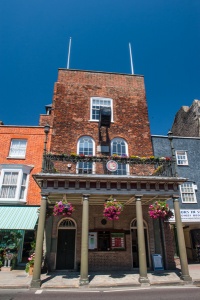 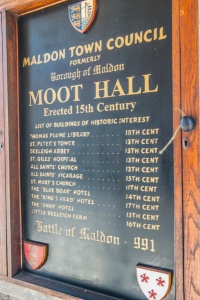