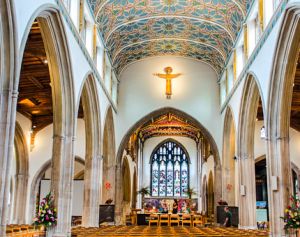 Chelmsford Cathedral
The Cathedral Church of St Mary, St Peter and St Cedd is housed in a 15th-century building which became a cathedral in 1914. Look for the finely painted Georgian ceiling in the nave.

The origins of the cathedral church are somewhat lost in time. It was begun as a simple parish church for Chelmsford, probably in the 13th century. The early medieval building was completely rebuilt in the 15th century, giving us the cathedral building we see today, with walls of flint rubble, brick, and stone. It was damaged during the Civil War when the east window was destroyed.

The late medieval building had to be considerably altered after the nave collapsed in 1800. The story goes that workmen doing repairs accidentally undermined a nave pillar, causing the structure to become unstable and fall in upon itself. Luckily no one was hurt, as recalled in the rhyme,

The county architect, John Johnson, was responsible for the rebuilding, echoing the Perpendicular Gothic of the original church, with piers and tracery of Coade stone.

The church was raised to cathedral status in 1914, making it the second smallest cathedral in England, serving the largest diocese. In 1953 the dedicated was enlarged to include SS Peter and Cedd.

The interiors were extensively remodelled from 1983, and all the Victorian furnishings were removed, to be replaced with a very modern set of furniture, font, and bishop's chair. The most striking parts of the interior are the colourfully painted nave and chancel ceilings. The nave ceiling is an excellent example of Georgian work, almost completely unaltered since it was made.

One modern work of art is a blank window filled in with 35 painted panels depicting an Essex tree, with scenes of regeneration and renewal. There is very good Victorian stained glass by the Clayton & Bell company; the east window dates to 1859 but was enlarged by the same company in 1878.

The exterior is where the age of the church is most apparent. The striking west tower is 15th-century work and has a beautifully carved west doorway. Atop the tower is an octagonal lantern built in 1749, at the same time as the slender spire. The two-storey south porch is 15th century, with finely crafted flint flushwork called by architectural historian Nikolaus Pevsner 'among the best in Essex'.

The porch doorways are Tudor, and the ceiling decorated with tracery panels. The 15th-century south chapel has a Perpendicular doorway. From outside you can see the medieval chancel, topped by clerestory designed by William Butterfield in 1877.

More self catering near Chelmsford Cathedral >>