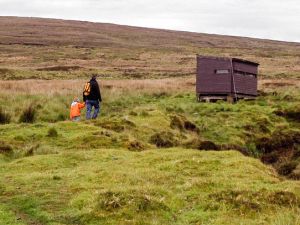 The bird hide at Cottascarth RSPB

This RSPB nature reserve north of Finstown is a fantastic place to see breeding curlews, and a good spot to spot hen harriers, merlins and short-eared owls.

Though there are many different bird species to be found nearby, it is really the curlew that is the star species at Rendall Moss, for the reserve boasts one of the highest densities of breeding curlews anywhere in Europe.

Winter highlights include blackbirds and snipe, while in the spring cuckoos and skylarks abound. Birds of prey are best seen in the summer and autumn, with kestrel and lapwings in addition to the species already mentioned. Look for female hen harriers over the moorland.

Access to the reserve is off the A966 between Finstow and Tingwall. A minor road leads west off the A966 at Norseman Village towards Settisgarth, then north to Lower Cottascarth Farm where there is a parking area.

There is a bird hide at Cottascarth, where 5 different species of birds of prey can be seen. The reserve is open at any time, and special information packs for families can be obtained from the RSPB centre in Stromness. 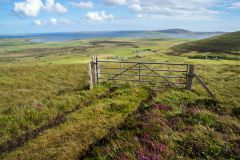 Nearby accommodation is calculated 'as the crow flies' from Cottascarth and Rendall Moss RSPB. 'Nearest' may involve a long drive up and down glens or, if you are near the coast, may include a ferry ride! Please check the property map to make sure the location is right for you.

More self catering near Cottascarth and Rendall Moss RSPB >>

More bed and breakfasts near Cottascarth and Rendall Moss RSPB >>