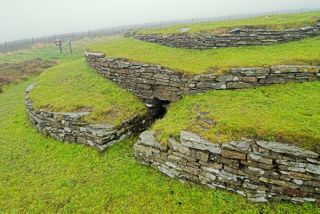 On a sloping hill at Wideford, between Kirkwall and Finstown, stands the impressive remains of a Neolithic chambered cairn, with a central burial chamber surrounded by three concentric stone walls.
The tomb was built sometime around 3000 BC, and was originally accessed along a low and narrow passage built into the mound from the west. Modern visitors get to skip the discomfort of crawling along the passage and can enter through a trapdoor set into the roof of the mound.

The inner chamber is quite large, roughly 3 metres high, so you can easily stand up and examine the interior. The builders were obviously experienced with dry stone construction, and the building of Wideford bears comparison with the famous burial mound of Maes Howe near Harray.

We do not know how many people were buried at Wideford, as the site had been robbed before it was first investigated by antiquarians in the mid-19th century.

What I found most impressive at Wideford was the exterior construction; the concentric stone walls are reminiscent of the stone houses at Skara Brae, in the far west of Orkney Mainland. They create an impressive ceremonial feel to the site. The burial mound is open at any time - like in the rainstorm when I visited, when the inner chamber provided a welcome shelter from the downpour outside! 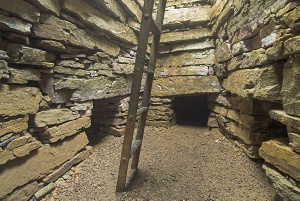 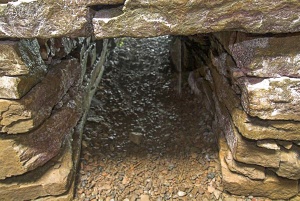 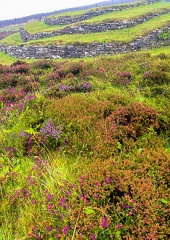 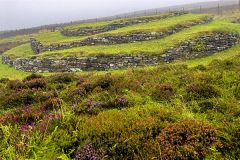 Nearby accommodation is calculated 'as the crow flies' from Wideford Hill Chambered Cairn. 'Nearest' may involve a long drive up and down glens or, if you are near the coast, may include a ferry ride! Please check the property map to make sure the location is right for you.