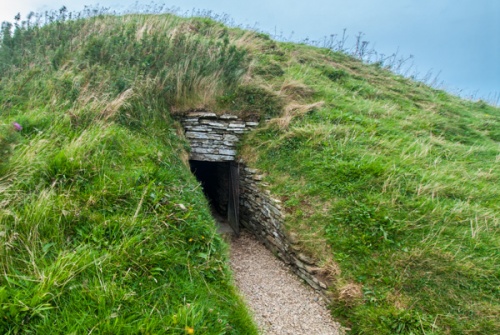 Cuween Chambered Cairn
Cuween is a chambered cairn, built in the Neolithic period, about 5,000 years ago. It is composed of a central chamber with 4 cells, reached by a low passage. When the chamber was excavated it was found to contain the remains of humans, dogs, and oxen.

Five skulls lay in the centre of the chamber, two in side cells, and one in the entrance passage. The skulls of 24 small dogs also lay in the central chamber. But why were the dog's interred here?

One theory is the local people used the dog as a totem, or tribal symbol. That seems likely, for other tombs on Orkney have their own 'tribal' animal remains, notably sea eagles at the Tomb of the Eagles and red deer at the Knowe of Yarso. 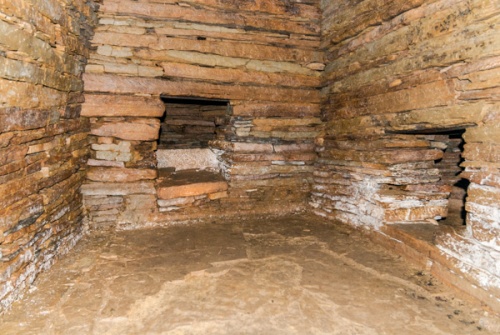 The only way to reach the inner chamber is by crawling on your hands and knees down the central passage until you reach the inner chamber. The passage is some 5.5 metres long (roughly 17 feet), but once you reach the central chamber you can stand up - with a great sense of relief, truth to be told! The chamber is over 2 metres high, and there is light from a modern window opening in the roof, allowing you to easily make out the interior.

The dry wall construction is remarkable, with a noticeable corbelling effect, as the walls gently taper inwards as they rise towards a modern ceiling inserted to support the mound. 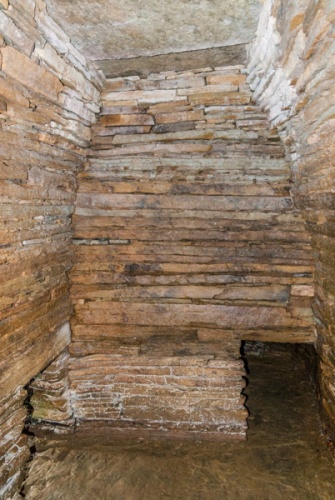 There are 2 main types of Neolithic burial monuments on Orkney. One is a stalled cairn, with a rectangular chamber divided by upright slabs to create compartments, or stalls, for interment. The other type is a chambered cairn, like Cuween, where there is a central chamber with smaller cells opening off it.

Nearby accommodation is calculated 'as the crow flies' from Cuween Hill Chambered Cairn. 'Nearest' may involve a long drive up and down glens or, if you are near the coast, may include a ferry ride! Please check the property map to make sure the location is right for you.